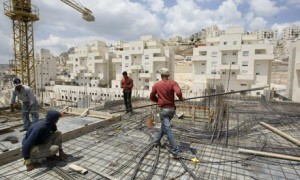 Jerusalem, Israel — October 28, 2014 … Jerusalem has been the capital of Israel for over 3,000 years. Israel Prime Minister Netanyahu and the Jewish citizens he represents didn’t just create this fact. In 1000 BCE – King David conquered Jerusalem and declared the city the Capital of the Jewish Kingdom.

So why would US State Department Spokeswoman Jen Psaki say that plans for new projects in Jerusalem were “incompatible with the pursuit of peace.” And Maja Kocijancic, a spokeswoman for outgoing EU foreign policy chief Catherine Ashton, describe the move “once again” calls into question Israel’s commitment “to a negotiated solution with the Palestinians.”

Netanyahu responded that Israel would continue to build new ports, pave roads, lay rail road tracks and “continue to build in our eternal capital.”“I heard the claim that our building in Jewish neighborhoods in Jerusalem makes peace more distant, but it is the criticism itself that makes peace more distant,” Netanyahu said of criticism that poured in following his announcement of plans to develop 660 more units in Ramot Shlomo in the northern part of the city and 400 in the southern neighborhood of Har Homa.This criticism, Netanyahu said, is “detached from reality” and feeds false Palestinian hopes.

What Netanyahu did not say today was that the conflict over Jerusalem is not about land. It is about Islamic Jihad (holy war) and removing all Jews and Christians (Infidels) from the Holy Land. And one has to smile at this fact given that Jerusalem is not mentioned even once in the Quran.

Netanyahu said the international community remains quiet when Palestinian Authority President Mahmoud Abbas “incites to the murder of Jews in Jerusalem,” but strongly condemns Israel when it builds in Jerusalem. The murder of a 3-month-old Jewish American baby by Hamas last week did not warrant comment by the US State Department but natural growth of Jerusalem becomes a flash point.“I don’t accept that double standard,” says Netanyahu. “We built in Jerusalem, we build in Jerusalem, and we will continue to build in Jerusalem.”

Only under free, democratic, Jewish rule is there today religious freedom to pray as a Jew, Christian or Muslim in Jerusalem. Can Jews or Christians pray in Saudi Arabia, Qatar, Iran or Syria?

Jen Psaki directly represents Obama. And rather than supporting Israel’s historical, biblical and legal right to Jerusalem, Obama sides with ISIS, Hamas, Al Qaeda and Islamic Jihad – creating doubt as to the true roots of Jerusalem.

Netanyahu noted that Obama and his staff could do themselves a favor by learning the facts before commenting.

“I think they (the Obama administration) should be acquainted with the facts first. You know? First of all, these are not settlements. These are neighborhoods of Jerusalem. We have Arab neighborhoods and we have Jewish neighborhoods.”

Netanyahu said that the Obama Administration’s position was discriminatory against Jews, and that he could not adopt such policies.

“Arabs in Jerusalem freely buy apartments, and nobody says that is forbidden. I will also not say that Jews cannot buy property in Jerusalem. There cannot be discrimination between Jews and Arabs,” insisted the prime minister.

“Discrimination based on religion, race or gender is illegal in the United States and in any other civilized country. The 2,600 apartments in Givat Hamatos, which we [first] approved two years ago, will enable more young people from all communities and religions to live in Jerusalem and build their future here, thereby strengthening the capital of Israel.
We will not apologize for that.”

One must ask if Obama’s obsessive criticism creates unity or encourages terrorism against Jews and Christians in Israel?
Is Obama and the Democratic Party of the US allies or enemies to the State of Israel?

On Tuesday, November 4th, the American public can respond at the voting booth.