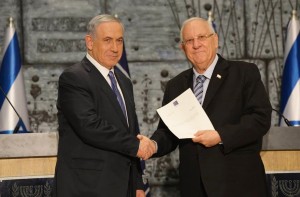 Jerusalem, Israel — March 25, 2015 … Part of the following was communicated by the President’s Office of Israel to the Israel News Agency.

President of Israel Reuven Rivlin this evening, appointed outgoing Prime Minister Benjamin Netanyahu MK, with the task of forming the 34th Government of Israel, at a ceremony at the President’s Residence in Jerusalem.  The President signed the official letter of appointment in his office with Prime Minister Netanyahu, before going on to make public statements.

“In democracy, majority rules, and the majority has made its voice heard clearly in this election,” said President Rivlin. “The role of the President in the election is to serve as a trustee of the public.  Having consulted with representatives of all the elected parties, I hereby announce that more than sixty-one Members of Knesset, have recommended the outgoing Prime Minister, Member of Knesset Benjamin Netanyahu, as the chosen candidate for the task of forming a government.”

“Sir, you receive today the appointment of forming the government. You have been awarded the trust, of this dear people, ‘the dwellers of Zion’.  With the current challenges which lie before us, upon you rests the heavy responsibility to build a stable, and as inclusive as possible government, and as soon as can be achieved.  We stand behind you, as you embark upon this important, and complex task.

Three critical missions lie before the incoming government and Knesset – the coalition and the opposition alike.  The first is the issue of the relationship between Israel and the United States, the most important of our allies.  The second is to return stability to the political system, and the rebuilding of public confidence in it.  We must not go back to elections in another two years.  And the third is healing the wounds, mending the painful rifts, which have gaped open in the past years, and widened further in the course of this recent election.”

The President continued: “Citizens of Israel, we have endured a difficult election period.  In the heat of our differences, it seems our sense of hearing has been dulled.  From every direction, things were said which ought not to have been said.  Not in a Jewish state, and not in a democratic state.  Fanning the flames serves no one.  The fire doesn’t only heat, it threatens to engulf in flames.  Today is the time to begin to heal these wounds.  It is a time to begin the task of mending the rifts.  We must be prepared, for more difficult times which may well come.  In order for us to be able to fight for our home, we must continue to build it together, all the citizens of Israel.  This responsibility rests on all our shoulders, and it rests on your shoulders, Mr. Prime Minister.  Together with all the Israeli people, I pray for your success.  I pray that your hand should be steady and your spirit strong.  Your success, is our success.  Your achievements, are our achievements.”

The Prime Minister responded: “I accept upon myself, with a deep sense of responsibility, the task of forming the government, which has been bestowed upon me.”

“I am moved, and aware of the magnitude of this responsibility.  I view myself as Prime Minister of each and every citizen of Israel.  I will act to mend the rifts which have opened up between different segments of society during the election.  We must put the election behind us, and focus on that which we have in common.  This is the way of a Jewish, democratic state, which maintains the rights of its citizens regardless of their faith, race or sex.  So it has always been, and so it always will be.”