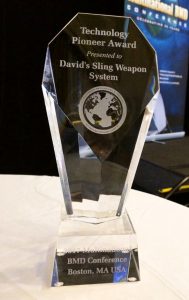 “The unique characteristics of the system interceptors are astounding in every test that is done. The DSWS is an important component of Israel’s operational capability to defend the country against regional missile threats. I would like to thank our American partners on the recognition of the ‘DSWS’ and the message it brings along.”

David’s Sling is a joint bi-national effort of the United States Missile Defense Agency and the Israel Missile Defense Organization (IMDO), of the Directorate of Defense Research and Development at Israel’s Ministry of Defense.

The prime contractor for the David’s Sling Weapon System Program is Rafael Advanced Defense Systems, with Raytheon Missile Systems as a sub-contractor. The Multi Mission Radar is developed by Elta, a subsidiary of Israel Aerospace Industries and the Battle Management Command, known as the Golden Almond, is developed by Elisra, an Elbit subsidiary.