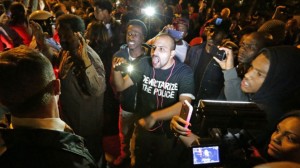 New York — October 11, 2014 … Police in St. Louis and Hammond, Indiana have recently come under attack – for doing their jobs. In St. Louis, police shot dead Vonderrit D. Myers after he opened fire at police during a chase.  Ballistic evidence shows Myers fired three shots at the police officers before his gun jammed. Police said they recovered the 9mm gun, which had been reported stolen on Sept. 26.

Online court documents illustrate Myers was free on bond when he was killed. He had been charged with unlawful use of a weapon, a felony, and misdemeanor resisting arrest in June in St. Louis. Syreeta Myers said her son was holding a sandwich, not a gun. “Police lie. They lied about Michael Brown, too,” she told The Associated Press by phone Thursday.

The shooting of Myers was a clear case of self defense by the police. Yet, the whole neighborhood erupted in violent protests and demonstrations with many verbally and physically attacking the police and doing their best to discredit local police forces on national TV.

In Hammond, police pulled over Lisa Mahone on Sept. 24 for a seatbelt violation, and when they asked her boyfriend, Jamal Jones, to get out of the car, he refused. Police said Jones also was not wearing a seat belt.

When Jones refused repeated requests from police to get out of the car, an officer broke the passenger’s side window with a club, used a stun gun on Jones, and dragged him out of the car. All this was video taped by a family member and is now going viral on national TV and the Internet. The police again responded in the most responsible manner.

When a police officer stops a car it makes no difference why he does so. To say that it was only for a seat belt violation means that one does not understand police and or professional security work. Each and every time a police officer stops a car for any reason he has no idea as to what is in that car. His life is in immediate danger. He must approach the car as cautiously as he or she can as a gun or other weapon could appear from anywhere.

And when a police officer instructs one to leave a car, they must do so with delay, keeping their hands visible. Jones would not leave the car and responded by reaching into a closed bag as he defied police orders.

Following the ISIS and Ebola news stories on US national TV, one will see the above news stories. Hundreds violently protesting against the police in the US for simply doing their jobs in protecting their local communities!

The first thing one must ask themselves is who is behind these senseless demonstrations and protests?
Where is the money coming from to organize these protests against critical infrastructure?

State Senator Jamilah Nasheed, a St. Louis Democrat, a devout Muslim with a history of gang violence, organized the media circus outside police headquarters. Rather than defending the local police for defending themselves she did all she could to discredit the police.

“It’s imperative that we began to heal this community,” Sen. Nasheed said. “This community has been broken down. We have too many deaths at the hands of police officers.”

Not “thank you” for keeping our neighborhoods safe but rather, don’t trust the police, they are excessive, brutal, they lie!

Police can be excessive from time to time. And they are investigated for such actions and suspended and or dismissed if found that they were were using excessive force or harassing the public. But when they are actually defending themselves from live gun fire is this “excessive” or “harassment”?

The officer, a six-year veteran who has not been named, was placed on administrative leave, per standard department procedure. He served two tours of duty with the military in Iraq and was awarded a Bronze Star and a Purple Heart.

It appears that a few are truly spinning facts and reality to intimidate and sue police departments for a profit.
But worse than that, using such spin to organize mass demonstrations to discredit police departments in the democratic United States of America. And professionally using social media to coordinate and get the images out.

Did we mention that protesters also burned at least one American flag in the four-day “weekend of resistance” — part of what is being dubbed Ferguson October?

Is it a red flag that State Senator Nasheed helped organize violent protests against the police in the US heartland?
Wait – that’s nothing. Read the next paragraph.

Nation of Islam member A. Akbar Muhammad of St. Louis was also on the scene coordinating with Nasheed.
What was he doing? Speaking to CNN and other national media stating: “You have to ask the question: Is there a culture of racism in the police department?”

“It’s a clear case of this young man being gunned down by an insensitive white officer who was off-duty,” Akbar Muhammad, who also is a member of a coalition calling for the officer who shot Brown to be prosecuted.

Don’t expect the local police departments and the FBI to connect the dots and then speak about it.
It’s not politically correct. And the Obama White House would not approve.
Just pray that someone, somewhere is monitoring Nasheed and  Muhammad’s computers and asking who are they associated with in the Middle East? Where are they getting their money?

Are we being racist?
Just ask those who attacked the World Trade Center, the Pentagon, Ft. Hood, the Boston Marathon, attempted bombing of Times Square, New York subways and who are today threatening the life of Twitter CEO Dick Costolo for taking down ISIS accounts.

You may also want to know if Nasheed or  Muhammad have criticized their fellow Muslim brothers and sisters for beheading Americans in Iraq and Syria?
Or are they are too busy with other very well organized “activities” on American soil.