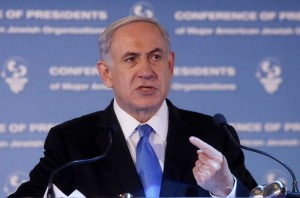 Jerusalem, Israel — February 16, 2015 … Part of the following was communicated by the Prime Minister’s Office to the Israel News Agency.

Following are Prime Minister Benjamin Netanyahu’s remarks today in Jerusalem, to the Conference of Presidents of Major American Jewish Organizations:

“Richard, thank you for those stirring words. They place an even greater burden on my shoulder. And it’s very good to be with you and Malcolm and all of you.

Today we lost a minister in my government and a dear friend. Uri Orbach loved the Jewish people. He loved the Land of Israel. He was taken from us when he still had much more to give. He will be sorely missed.

Tonight I want to address some important questions that have undoubtedly been on your minds. First, why am I going to Washington?

I’m going to Washington because as Prime Minister of Israel, it’s my obligation to do everything in my power to prevent the conclusion of a bad deal that could threaten the survival of the State of Israel. The current proposal to Iran would endanger Israel. It would enable Iran to breakout to its first nuclear device within an unacceptably short time. And it would allow Iran to build an industrial capability to enrich uranium that could provide the fuel for many bombs in the coming years.

I’m certainly not opposed to negotiations. On the contrary – no country has a greater interest, a greater stake, in the peaceful resolution of the Iranian nuclear question than does Israel. But the current proposal will not solve the problem. It will perpetuate and aggravate the problem. It would provide a path for Iran to become a nuclear power. And therefore it’s very important that I speak about this in Washington.

Second question: Why am I going to Congress?

Because Israel has been offered the opportunity to make its case on this crucial issue before the world’s most important parliament; because a speech before Congress allows Israel to present its position to the elected representatives of the American people and to a worldwide audience; because Congress has played a critical role in applying pressure to the Iranian regime – the very pressure that has brought the ayatollahs to the negotiating table in the first place; and because Congress may very well have a say on the parameters of any final deal with Iran. That’s why I’m going to Congress.

I think the real question that should be asked is how could any responsible Israeli prime minister refuse to speak to Congress on a matter so important to Israel’s survival? How could anyone refuse an invitation to speak on a matter that could affect our very existence when such an invitation is offered?

The deadline for reaching an agreement with Iran is March 24th. That’s the date that drives the speech. Now is the time for Israel to make its case – now before it’s too late. Would it be better to complain about a deal that threatens the security of Israel after it’s signed? I believe it’s more responsible to speak out now to try to influence the negotiations while they’re still ongoing.

I think the whole point of Zionism is that the Jewish people would no longer be spectators to the decision-making that determines our fate. Remember, we were once powerless. We were once voiceless. We couldn’t even speak on our own behalf. Well, we can and we do now.

The answer to all three questions is the same. Why Congress? Why Washington? Why now? Because of the grave dangers posed by the deal that is on the table right now.

The battle against the Islamic State, which just beheaded 21 Christians, is not a partisan issue. And the effort to prevent the Islamic Republic from building nuclear weapons, that’s not a partisan issue either. I think the pursuit of nuclear weapons by Iran is the most urgent security challenge facing the world. I think the greatest danger facing humanity is the possibility that any movement or any regime of militant Islam will arm itself with the weapons of mass destruction. Everything that we see in our region now will pale by comparison. Everything that we see in Europe will pale by comparison.

When a militant Islamic regime that is rampaging through the region right now – that’s what Iran is doing, it’s conducting a rampage through the region – when such a regime has nuclear weapons, the whole world will be in peril. Look at what Iran is doing now without nuclear weapons. States are collapsing. And Iran is plunging forward. It’s already controlling four capitals. It’s controlling now through its Houthi proxies the Bab-el-Mandeb Straits.

It’s trying to envelope Israel with three terrorist tentacles – Lebanon, Hezbollah, Hamas in Gaza and now it’s trying to build with its Hezbollah proxies a third front in the Golan. Such a regime with nuclear weapons would be infinitely more dangerous to everyone, not only to Israel.

Now can I guarantee that my speech in Congress will prevent a dangerous deal with Iran from being signed? Honestly, I don’t know. No one knows.

But I do know this – it’s my sacred duty as Prime Minister of Israel to make Israel’s case. OnMarch 3rd, I’ll fulfil that duty, representing all the citizens of Israel before the two houses of Congress. And I will make the best case for Israel that I can, knowing that our case is just, that our case is sound, and that our case offers the best hope to resolve this issue peacefully.