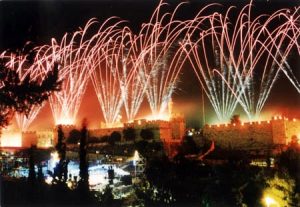 Jerusalem, Israel — May 16, 2017 … Jerusalem Day festivities will begin this year on Sunday, May 21, 2017, at 20:30, opposite Jerusalem’s Old City wall adjacent to the Jaffa Gate. The main sound-and-light-show event celebrating 50 years since the liberation and reunification of Jerusalem, at the initiative of Culture and Sports Minister and Chairperson of the Ministerial Committee on Symbols and Ceremonies is open to the public.

“No other people in the world have such a deep and long-standing relationship to its capital city as the Jewish people have to Jerusalem,” said Minister Regev.

“Jerusalem Day festivities have never been as developed, prosperous and flourishing as it is today. Neither has there been such a multimedia presentation on the city wall. Come and celebrate with Jerusalem on the 50th anniversary of its liberation and unification.”

In celebration of the 50th anniversary of the unification of the city, dozens of events will be held throughout the city, including shows, tours, musical performances, colorful parades, ceremonies, light exhibitions and more

Festive reception hosted by the Mayor at the Tower of David Museum – A live museum with central characters from Jerusalem’s past and present and a concert by the Jerusalem Andalusian Orchestra and the singers Emil Zrihan, Orit Atar and Idan Amedi.

“Singing for You, Jerusalem” at the President’s Residence.

The Jerusalem Symphonic Orchestra and Miri Mesika, David D’Or and Kobi Aflalo at Safra Square. Dozens of events and performances in the neighborhoods. Yakir Yerushalayim Award ceremony at the Tower of David

Beer Garden – athletes on the bar in collaboration with the Maccabiah, music, beer, games and food at Kikar HaHatulot.

On Wednesday, May 24, 2017, celebrations of 50 years of Jerusalem’s reunification continue. During the week of May 21 to 25, 2017, the Jerusalem Municipality will mark these celebrations with a wide variety of events and shows held throughout the city for the benefit of residents and visitors.

The Annual White Night celebration will be held to celebrate Student Day. To mark 50 years to the unification of the city, this year the event will include the best singers and will be held across the city – in Sacher Park, Kikar HaHatulot, a street party at Zion Square, Mitchell Garden, and a sunrise concert at Safra Square.

“Fifty years have passed since Jerusalem has been united, and this year we will celebrate with a wide variety of events, allowing more and more people to connect with Jerusalem and take part in the festivities,” said Jerusalem Mayor Nir Barkat.

“I invite all the residents and visitors of Jerusalem to come join the celebrations in honor of the reunification of our nation’s capital.”