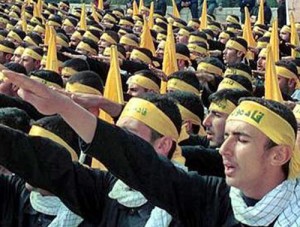 The Nazi salute and intent to murder Jews is the same.

Jerusalem, Israel — July 28, 2015 … There is good reason to refrain from bandying about the word “Holocaust” with abandon. The defining atrocity of the 20th century has to be given the gravitas it deserves. Comparing lesser events to the meticulously planned genocide of Europe’s Jews is both cheapening and a cheap trick. Indeed, invoking the Nazis frivolously is as sinful as denying the mass murder they carefully carried out.

Nevertheless, both the former and the latter have grown so commonplace that they barely elicit a yawn any more. This is the case even when they are used interchangeably — and simultaneously — by the same source, usually by Islamists, who alternate between Holocaust denial and accusing Israel of Holocaust perpetration.

Take, for example, a statement made over the weekend by former Arkansas governor and current Republican presidential candidate Mike Huckabee. During a radio interview with Breitbart Editor-in-Chief Alexander Marlow on “Breitbart News Saturday,” Huckabee attacked President Barack Obama for the nuclear agreement reached with Iran. “This president’s foreign policy is the most feckless in American history,” he said. “It is so naive that he would trust the Iranians. By doing so, he will take the Israelis and march them to the door of the oven. This is the most idiotic thing, this Iran deal. It should be rejected by both Democrats and Republicans in Congress and by the American people. I read the whole deal. We gave away the whole store. It’s got to be stopped.”

For his veiled reference to Nazi gas chambers, Huckabee has been raked over the coals across the political and religious spectrum.

Obama, who took the opportunity to go after Republican presidential hopefuls Donald Trump and Senator Ted Cruz, as well, responded: “The particular comments of Mr. Huckabee are just part of a general pattern we’ve seen that would be considered ridiculous if it weren’t so sad.”

Democratic presidential candidate Hillary Clinton said, “Comments like these are offensive and have no place in our political dialogue. I am disappointed and I am really offended personally.”

Jonathan A. Greenblatt, national director of the Anti-Defamation League, was equally angry.

He released a formal statement, asserting that: “Comments such as those by Mike Huckabee suggesting the president is leading Israel to another Holocaust are completely out of line and unacceptable. … To hear [him] invoke the Holocaust when America is Israel’s greatest ally and when Israel is a strong nation capable of defending itself is disheartening.”

“The use of that kind of language is just wrong,” he said. “This is not the way we’re going to win elections and that’s not how we’re going to solve problems. So, unfortunate remark — not quite sure why he felt compelled to say it.”

Israeli Ambassador to the U.S. Ron Dermer, too, expressed displeasure with Huckabee’s remarks.

“These are not words that I would use or that I think are appropriate,” he said.

Rather than backtrack or claim he was taken out of context, Huckabee doubled down.

Grilled by Fox News‘ “The Five” on Monday, he elaborated: “If we don’t take seriously the threats of Iran, then God help us all. Because the last time — it’s Neville Chamberlain all over again. We’re gonna just trust that everyone’s gonna do the right thing. Three times I’ve been to Auschwitz. When I talked about the oven door, I have stood at that oven door. I know exactly what it looks like.”

Panelist Geraldo Rivera then called him to task for presumptuousness and exaggeration.

“This was the systematic attempt by an industrialized nation to wipe out a race of people,” Rivera said. “That is different. That is unique. You may not go there, and I’m begging you to apologize and to retract that.”

“I will not apologize and I will not recant,” Huckabee retorted. “Because the word ‘Holocaust’ was invoked by the Iranian government. They used that very word.”

Ayatollah Ali Khamenei, the supreme leader of Iran, has openly called for the genocide of the Jews. Street demonstrations in Iran, particularly those celebrating the anniversary of the Islamic Revolution and the taking of the U.S. Embassy staff hostage in 1979, all include chants of “Death to Israel,” alongside those of “Death to America,” and involve the burning of the flags of both countries.

The nuclear deal not only will enable Iran to acquire weapons of mass destruction within a decade (if not sooner), but it immediately hands the mullah-led regime $150 billion with which to bolster its bomb-building and other terrorist activities across the globe.

As Rivera pointed out, Hitler tried to “wipe out a race of people.” But Khamenei and his puppets make no bones about their aim to “wipe Israel off the map” — and to subjugate or slaughter all “infidels” who do not adhere to the specific version of Shia Islam that is destined to dominate the world. And the plan is already tangibly in action.

In spite of my own aversion to the abuse of imagery where the Holocaust is concerned, I see nothing far-fetched in Huckabee’s warnings. While his critics are going figuratively ballistic over his “offensive language,” Iran is literally going ballistic. With real missiles and genocidal goals.

Words should not be taken lightly. Huckabee’s ought to be heeded.

Ruthie Blum is the web editor of Voice of Israel talk radio (voiceofisrael.com).