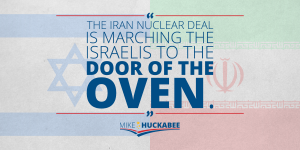 Jerusalem, Israel — July 27, 2015 …  Former Arkansas governor and 2016 GOP presidential candidate Mike Huckabee recently stated that: “The Iran nuclear deal is marching the Israelis to the door of the oven.”

Huckabee added: “What’s ‘ridiculous and sad’ is that President Obama does not take Iran’s repeated threats seriously. For decades, Iranian leaders have pledged to ‘destroy,’ ‘annihilate,’ and ‘wipe Israel off the map’ with a ‘big Holocaust.’ ‘Never again’ will be the policy of my administration and I will stand with our ally Israel to prevent the terrorists in Tehran from achieving their own stated goal of another Holocaust.”

The Israel News Agency completely agrees with the comparison of Nazi Germany with a nuclear enabled terror state – Iran. The birth of modern day Israel was a direct result of the Holocaust. We in Israel live as an extension of the Holocaust and swear as we enter the IDF and other Israeli security forces: “Never Again.”

It is very disappointing that a few in the United States have clearly no idea as to how real the Iranian threat is to Israel.

Jonathan Greenblatt, the new national director of the ADL, issued a statement, calling Huckabee’s comments invoking the Holocaust “completely out of line and unacceptable.”

“Israeli military and security officials have repeatedly said the Obama Administration has been as strong as any other American administration in keeping Israel secure,” Greenblatt wrote.

One must only wonder out loud, has Jonathan Greenblatt been briefed by Israel’s Ministry of Defense? If not, why not? And if Greenblatt has not been briefed, then we place the ignorance of his comments not at his new ADL New York desk but those at the MOD who should know to trust and inform our friends.

Jonathan, the threat is real.

Iran, if not detered from being able to produce nuclear weapons and providing billions of dollars to Hamas and Hezbollah, does constitute a real time threat of Holocaust proportions to Israel.

Israel is counting on the US Congress to do the right thing.
If not, Israel and her neighbors in the Middle East reserve the right to defend themselves from the lethal results of Obama’s appeasment policy.

It was not Huckabee who first said the word Holocaust – it was and is the Iranian goverment:

– “It is the mission of the Islamic Republic of Iran to erase Israel from the map of the region.” – Ayatollah Khamenei
Source: http://jcpa.org/wp-content/uploads/2012/05/IransIntent2012b.pdf#page=6

– “If they [Jews] all gather in Israel, it will save us the trouble of going after them worldwide.” – Hassan Nasrallah, Hezbollah leader
Source: http://www.dailystar.com.lb/News/Lebanon-News/2002/Oct-23/21779-nasrallah-alleges-christian-zionist-plot.ashx

Huckabee appeared on Fox News today and one of the co-hosts, Geraldo Rivera, stated that he was Jewish and that people do not use the word Holocaust. Huckabee responded: “Why do we have the Yad Veshem Holocaust Memorial in Jerusalem, Holocaust museums in New York and Washington? We have them to never forget. We have them to say never again. I am saying never again!”