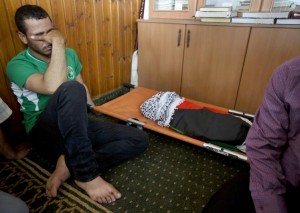 Jerusalem, Israel — July 31, 2015 … Israeli Prime Minister Benjamin Netanyahu, this afternoon at the Chaim Sheba Medical Center at Tel Hashomer, visited the family of Ali Dawabsha, who was murdered this morning in his home.

The Prime Minister said at the end of his visit: “I just came from the bedside of four-year old Ahmed Sa’ed. Sixty percent of his body is burned. We’re doing everything we can to save this young boy, give him a life. His two parents are in other parts of the Israeli health system.”

“We’re trying to give them the best treatment to save their lives. When you stand next to the bed of this small child, and his infant brother had been so brutally murdered, we’re shocked, we’re outraged. We condemn this. There is zero tolerance for terrorism wherever it comes from, whatever side of the fence it comes from, we have to fight it and fight it together.”

“I spoke to President Abu Mazen right before I entered the hospital. I told him of this visit and of Israel’s absolute commitment to find the perpetrators, bring them to justice. We have to calm the spirits and recommit ourselves to our joint battle against terrorism and extremism. It’s something that all parts of the Israeli government and all parts of Israeli society agree on. It’s important that we make a common cause with our Palestinian neighbors to give ourselves a better future – a future free of violence, free of terror, a future of peace.”

Netanyahu said he directed the Israeli security services to use all means at their disposal to apprehend those responsible and bring them to justice.“The government of Israel is united in its opposition to terrible and heinous acts such as these,” he said, adding that – speaking for the entire country – he wanted to send his condolences to the family of the baby killed in the attack and wishes for a speedy recovery to those injured.Israel Defense Minister Moshe Ya’alon referred to the terror attack and the death of baby Ali Dawabsha as “a most severe terrorist act that we cannot tolerate, and we condemn in every way.”He noted that all security forces including the Shin Bet (Israel Security Agency), the IDF and police are carrying out a “supreme effort” to find those responsible, saying “we will pursue them until we get our hands on them.”“We will not allow Jewish terrorists to harm the lives of Palestinians across Judea and Samaria. We will fight them in every way, with every tool at our disposal.”

A Facebook page has been established for Jews worldwide to condemn acts of Jewish terrorism: www.facebook.com/jewscondemnjewishterrorism