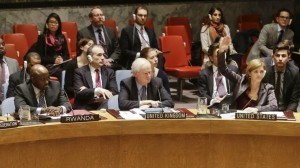 Samantha Power, US ambassador to UN, right,
votes during a meeting of the UN Security Council.

New York, New York — December 30 … Lethal, Islamic terror attacks and the potential for a new Middle East war were avoided this evening as the UN Security Council defeated a Palestinian resolution calling for Israel to withdraw from Palestinian territories by late 2017.The UN resolution called for negotiations to be based on territorial lines that existed before Israel captured the West Bank, east Jerusalem and the Gaza Strip in the Six Day War. It also demanded that a peace agreement be reached within 12 months.

If a bid for Palestinian statehood was accepted this evening, the world would have witnessed an immediate power struggle between Islamic terror groups Hamas, ISIS and the Palestinian Authority for control of the West Bank with Iran and Syria shooting missiles at Tel Aviv, Haifa and Jerusalem.

Many Middle East analysts could not believe that Western nations such as France voted for a Palestinian state, not knowing which Palestinian group would be controlling the new state.Even if the UN draft had received the minimum nine votes in favor, it would have been defeated by Washington’s vote against it. The United States is one of the five veto-wielding permanent members.There were eight votes in favor, two against and five abstentions. Australia joined the United States in voting against the measure.US Ambassador to the United Nations Samantha Power defended Washington’s position against the draft in a speech to the 15-nation council by saying it was not a vote against peace between Israeli and the Palestinians.“The United States every day searches for new ways to take constructive steps to support the parties in making progress toward achieving a negotiated settlement,” she said. “The Security Council resolution put before us today is not one of those constructive steps.”“It is deeply imbalanced and contains many elements that are not conducive to negotiations between the parties, including unconstructive deadlines that take no account of Israel’s legitimate security concerns,” she said, adding that it “was put to a vote without a discussion or due consideration among council members.”In a brief statement, Israeli delegate Israel Nitzan told the council that the Palestinians have found every possible opportunity to avoid direct negotiations and came to the council with “a preposterous unilateral proposal.”“I have news for the Palestinians – you cannot agitate and provoke your way to a state,” he said.The Israeli government had said that a Security Council vote, following the collapse in April of US-brokered talks on Palestinian statehood, would only deepen the conflict.Israel, which pulled troops and settlers out of the Gaza Strip in 2005, has said its eastern border would be indefensible if it withdrew completely from the West Bank.

Several Western council diplomats told Reuters they had been surprised by the Palestinians’ sudden push to submit a final draft resolution to the United Nations Security Council on Monday and put it to a vote on Tuesday or Wednesday.

Jordanian U.N. Ambassador Dina Kawar, the sole Arab representative on the council, told reporters all 22 Arab delegations endorsed the Palestinian proposal, and the Jordanians and Palestinians would consult immediately on “the best time to cast the vote in the Security Council.”

The US has insisted on a negotiated peace agreement between Israel and the Palestinians, not an imposed timetable. Kerry had held a series of telephone conversations over the last 48 hours with the foreign ministers of Britain, Chile, Egypt, the European Union, France, Germany, Jordan, Lithuania, Luxembourg, Russia and Saudi Arabia. He also spoke with Rwanda’s president and Palestinian Authority President Mahmoud Abbas.

Canadian Foreign Affairs Minister John Baird called on the Security Council members to vote down the resolution and focus on encouraging negotiations instead.

“Canada fundamentally believes that Palestinian statehood can only be a by-product of negotiations with the State of Israel,” Baird said in a statement. “We have long rejected unilateral action on either side, as we believe it is ultimately unhelpful to the cause of peace.”

Israel’s Prime Minister Benjamin Netanyahu said in a statement Monday that if the Security Council doesn’t reject the resolution, “we will.”

Netanyahu said Israel expected at least “the responsible members” of the international community to vigorously oppose the resolution “because what we need always is direct negotiations and not imposed conditions.”

Many Israelis want a two state solution. They desire a real and long lasting peace but they do not want another Islamic Jihad controlled Gaza sitting next to Ben-Gurion Airport that would hold the children of Tel Aviv and Jerusalem hostage to mortar and missile terror attacks.