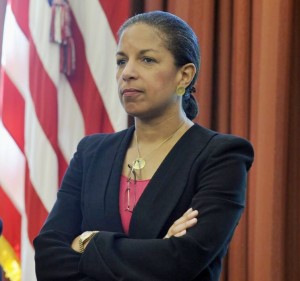 Jerusalem, Israel — February 25, 2015 … Is there any dirty job for the Obama Administration that Susan Rice is not prepared to do?

Need someone to fraudulently blame the murder of an American Ambassador in Libya on a stupid film? Send Susan to the Sunday talk shows.

Need someone to savage the leader of the only democracy in the Middle East as damaging the “fabric” of Israel’s relationship with the United States? Put Susan in the makeup chair of Charlie Rose.

Yes, it seems there is nothing Susan isn’t prepared to do.

And why should that surprise us?

This is the same Susan Rice who forbade Israel from criticizing John Kerry in her infamous tweet: “Personal attacks in Israel directed at Sec Kerry totally unfounded and unacceptable.” Yes, Israel’s freedom of expression is circumscribed by none other than Susan Rice.

But there is another reason Susan Rice’s attack on the Prime Minister of Israel on Charlie Rose merits special opprobrium and that is the unique insensitivity she is famous for when it comes to genocide.

Iran is threatening to annihilate Israel.

It is building the bombs to make that possible. It has lied to the world for more than a decade about its nuclear program. Iran is an oil superpower and energy exporter that needs nuclear energy about as much as I need a pork sandwich.

America is about to do a bad deal with Iran that will leave them something in the range of 5000 spinning centrifuges enriching Uranium. Israel is not party to the talks. It has been cast in the same position of Czechoslovakia in the Munich agreement of 1938 where Britain and France negotiated away Czech security (and much of the country) without the Czechs even allowed to be present.

And while Israel faces the possibility of genocide, Susan Rice shows gross insensitivity to an Israeli leader for simply speaking out.

But why shouldn’t Netanyahu entrust Israeli security to Susan Rice?

Perhaps its because of her record of trivializing genocide.

In 1994 Susan Rice was part of Bill Clinton’s National Security Team which took no action whatsoever during the Rwandan genocide, leaving more than 800,000 men, women, and children to be hacked to death by machete in the fastest slaughter of human beings ever recorded.

Not content to insist on American non-involvement, the Clinton administration went a step further by obstructing the efforts of other nations to stop the slaughter. On April 21, 1994, the Canadian UN commander in Rwanda, General Romeo Dallaire, declared that he required only 5000 troops to bring the genocide to a rapid halt. In addition, a single bombing run against the RTLM Hutu Power radio transmitting antenna would have made it impossible for the Hutus to coordinate their genocide.

But on the very same day, as Phillip Gourevitch details in his definitive account of the Rwandan genocide We Wish to Inform You that Tomorrow We will Be Killed With Our Families, the Security Council, with the Clinton Administration’s blessing, ordered the UN force under Dallaire reduced by ninety percent to a skeleton staff of 270 troops who would powerlessly witness the slaughter to come. This, in turn, was influenced by Presidential Decision Directive 25, which “amounted to a checklist of reasons to avoid American involvement in UN peacekeeping missions,” even though Dallaire did not seek American troops and the mission was not peacekeeping but genocide prevention.

Indeed, Madeleine Albright, then the American Ambassador to the UN, opposed leaving even this tiny UN force. She also pressured other countries “to duck, as the death toll leapt from thousands to tens of thousands to hundreds of thousands … the absolute low point in her career as a stateswoman.”

In a 2001 article published in The Atlantic, Samantha Power, author of the Pulitzer-Prize winning A Problem from Hell who is now Rice’s successor as American Ambassador to the United Nations, referred to Rice and her colleagues in the Clinton Administration as Bystanders to Genocide. She quotes Rice in her 2002 book as saying, “If we use the word ‘genocide’ and are seen as doing nothing, what will be the effect on the November congressional election?”

This is an astonishing statement. Here you have Susan Rice hearing about the murder of 330 people every hour for 3 months and her response is: “How will this affect us politically?”

That Rice would have brought up the midterm elections as a more important consideration than stopping the mass murder of so many men, women, and children that their bodies were damming the rivers of Rwanda is one of the most heartbreaking pronouncements ever uttered by American official.

But she did not stop there.

Rice then joined Madeline Albright, Anthony Lake, and Warren Christopher as part of a coordinated effort not only to impede UN action to stop the Rwandan genocide but to minimize public opposition to American inaction by removing words like “genocide” and “ethnic cleansing” from government communications on the subject.

In the end, eight African nations, fed up with American inaction, agreed to send in an intervention force to stop the slaughter provided that the U.S. would lend them fifty armored personal carriers.

The Clinton Administration decided it would lease rather than lend the armor for a price of $15 million. The carriers sat on a runway in Germany while the UN pleaded for a $5 million reduction as the genocidal inferno raged.

The story only gets worse from there, with the Clinton State Department refusing to label the Rwanda horrors a genocide because of the 1948 Genocide Convention that would have obligated the United States to intervene, an effort in grotesque ambiguity that Susan Rice participated in.

It was painful enough to watch Kofi Anan elevated to Secretary General even though as head of UN peace-keeping forces worldwide he sent two now infamous cables to Dallaire forbidding him from any efforts to stop the genocide (the cables are on display in the Kigali Genocide Memorial).

It’s nearly as painful watching Rice now attack the Jewish state, which lost one third of its entire people in a genocide of four short years, about how its elected leader is destroying its relationship with the world’s greatest superpower simply because a weaker nation insists on standing up for itself and speaking truth to power.

Rabbi Shmuley Boteach is a Jewish hero. Never afraid to speak up when other Jewish leaders remain silent. A man whom Newsweek and The Washington Post call “the most famous Rabbi in America,” is the international best-selling author of 30 books and has recently published The Fed-up Man of Faith: Challenging G-d in the Face of Tragedy and Suffering. His website is www.shmuley.com. Follow him on Twitter @RabbiShmuley.