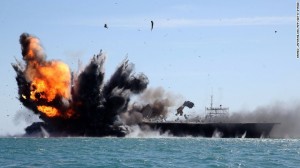 Jerusalem, Israel — February 26, 2015 … When people ask why is Israeli Prime Minister Netanyahu coming to Washington to discuss Iranian nuclear weapons, all they need to do is Google Iran.

The first news item to appear is an Iranian military attack on mock US warships.

An attack on mock US warships as Obama negotiates a nuclear weapons agreement with Iran?
Let’s make this vividly clear, as US Secretary of State Kerry sits in Geneva in peace talks with Iranian leaders, Iran hangs Obama in effigy at a huge Tehran-sponsored rally marking the Islamic Revolution’s 36thanniversary, an event that underscores the absurdity of the ongoing diplomatic effort.

As Obama and Kerry beg for a deal with Iran, Iran displays on their state TV attacks against mock US targets. And so that there is no misunderstanding, a camera from Iranian state TV panned across a banner which reads: “If the Americans are ready to be buried at the bottom of the waters of the Persian Gulf – so be it”, a quote from Iran’s first Supreme Leader, Ayatollah Ruhollah Khomeini.

Is Israel going to trust it’s very survival with a US President who begs Iran for any nuclear agreement while being spit on by Iran?
A US President who will not share the details of Iranian nuclear talks with Israel?
A US President who ignores Israel’s leaders and instructs his Vice President and Secretary of State and every democratic member of Congress to ignore Israel’s Prime Minister?

But perhaps of even greater concern is Kerry’s recent remarks before Congress.

Kerry testified: “Despite ISIL, despite the visible killings that you see and how horrific they are, we are actually living in a period of less daily threat to Americans and to people in the world than normally; less deaths, less violent deaths today, than through the last century.”

Retired US Lt. Gen. Michael Flynn , former head of the Defense Intelligence Agency, responded saying that Kerry is “out of touch with reality, he clearly is not listening to the entire U.S. intelligence community.”

The top U.S. intelligence official today gave a drastically different assessment than Secretary of State John Kerry of the terror threat – declaring 2014 the deadliest year for global terrorism ever recorded.

“When the final accounting is done, 2014 will have been the most lethal year for global terrorism in the 45 years such data has been compiled,” Clapper told the Senate Armed Services Committee.

And Israel is supposed to “trust” Obama, Kerry and Rice with it’s survival?

Iran is threatening to annihilate Israel.

It is building the nuclear bombs to make that possible. It has lied to the world for more than a decade about its nuclear program. Iran is an oil superpower and energy exporter that has no need for nuclear energy.

America is about to sign a bad deal with Iran that will leave them something in the range of 5000 spinning centrifuges enriching Uranium. Israel is not party to the talks. It has been cast in the same position of Czechoslovakia in the Munich agreement of 1938 where Britain and France negotiated away Czech security (and much of the country) without the Czechs even allowed to be present.

And while Israel faces the possibility of genocide, the Obama administration shows gross insensitivity to an Israeli leader for simply speaking out.

Netanyahu does not come to the US to get elected in Israel. The average voter in Israel could care less about seeing Netanyahu meeting with Obama. They only care for maintaining a stable economy, having a pay check to pay for their food and for their national security which needs to defend against Islamic terror and missile attacks.

Israel and the US enjoy the best relations. This love affair between two, modern democracies is not in any danger. Their shared values are on the same page, same paragraph, same word.
One would only suspect that Iran and other Islamic nations would want to play divide and conquer but there is no need too as long as Barack Obama keeps acting hostile to it’s closet, most trusted ally in the Middle East.

With Kerry, at Congress calling into question Netanyahu’s judgement, using Netanyahu’s support for an Iraqi invasion, something that Kerry voted for and Susan Rice, declaring that Netanyahu was destroying the fabric between the US and Israel, it is not hard to understand why Fox News asked today: “Is President Obama anti-semitic?”