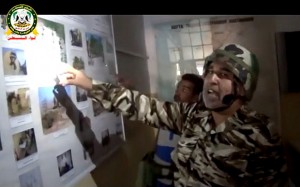 In video footage of the base released by the Free Syrian Army, a rebel officer is shown
pointing out maps, photographs and information in Russian and Arabic.

Jerusalem — October 9, 2014 … Syrian rebels have captured a joint Russian-Syrian spy base which was used to gather intelligence on the movements of rebel groups and Israel.

Located in southern Syria close to the Israel border, the base on the Tel Al Hara mountain known as ‘Centre C’ by Russian intelligence was taken over by the Free Syrian Army – the largely moderate, Western-backed rebel group – on Sunday.

The capture of the Russian base, which was abandoned prior to the rebels’ arrival, came after weeks of fierce fighting involving Syrian government troops as well as Jabhat al-Nusra, al-Qaeda’s Syrian branch.

In video footage of the base released by the Free Syrian Army, a rebel officer is shown pointing out maps, photographs and information in Russian and Arabic, as well as the logos of Syrian intelligence and Russian military intelligence (GRU), which deals with signal intelligence.

One of the wall maps visible in the video shows northern Israel with pinpointed Israeli military units and signal stations.

The extent of Russian-Syrian intelligence and military cooperation is vast and has been established for many decades.

In 2006, Jane’s Defence Journal reported that Hezbollah was receiving intelligence from two Russian-Syrian intelligence posts during its war with Israel, one of which was identified as being located on the Golan Heights.

“The Russians have had varying levels of activity and personnel in Syria since the Cold War”, said Mr Nisman. “There are [also] all sorts of different Russian personnel embedded with different Syrian units.

“West of Damascus, near the Beirut-Damascus highway, there’s a Russian satellite imagery analysis base,” Mr Nisman said, where military from Russia work with Syrians on satellite imagery, used at present to track the movements of the rebels.

According to Jane’s Defense, the funding for the intelligence posts comes largely from the Iranian Revolutionary Guard Corps (IRGC).

It is not clear when Centre C had stopped being operated by the Russians. The Free Syrian Army claims that the post was vacated by Russian personnel only weeks ago, whilst other analysts suggest the Russian personnel left at the start of the Syrian civil war, which began in 2011.