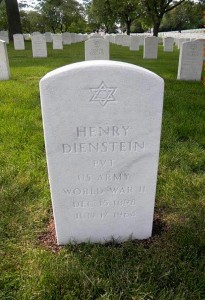 Jerusalem, Israel — May 8, 2015 … Israel President Reuven Rivlin addressed an official state ceremony marking seventy years since the victory of the Allied forces over Nazi Germany.  The ceremony was dedicated to the Jewish servicemen and women who fought and served in the Allied armies.

“We mark here this evening seventy years since the victory of the free world, over the Nazi beast, and pay tribute to the Jewish fighters who played a part in this victory,” said Rivlin.

“Around one and a half million Jews served in the Second World War, around eight percent of the entire Jewish population, and around half a million of whom, fell in battle.  Jewish servicemen fell as submarine commanders, fighter pilots, tank and infantry commanders, in the engineers and artillery corps, riflemen and regular soldiers.  In every branch of the military, of each army which fought against the Nazis, were found decorated and dedicated Jewish heroes.  No political affiliation, and no Jewish community was absent from the war.”

The President addressed the World War Two veterans attending the ceremony, and stressed the tremendous legacy they had left for their children and grandchildren.

“We look to the past, and beyond you we see the faces of the Maccabees.  We look to the future and we see the faces of the soldiers and commanders of the Israel Defense Forces.  You are all links in the intricate chain of Jewish heroes, whose roots are in the pages of the Bible, and whose responsibility today, is to the defense of the people and land of Israel.  The soldiers of the IDF, who stand at the ready on our borders, who are right now providing assistance to the Nepalese people dealing with disaster, they are your grandchildren.  You have taught them the secret of heroism and humanity, the ethics of battle, and bravery.  Your tremendous valor, dear veterans, is deserving of a fitting commemoration.”

At the end of his address, the President stressed the national obligation to the swift completion and inauguration of the museum to commemorate the achievements and the sacrifice of the Jewish war veterans.  The ceremony, held at the Latrun Tank Memorial (Yad LeShiryon), also included addresses by Prime Minister Benjamin Netanyahu, Defense Minister Moshe Ya’alon, and IDF Chief-of-Staff Lt.-Gen. Gadi Eizenkot.