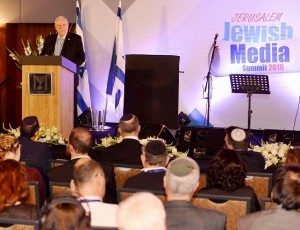 Jerusalem, Israel — December 5, 2016 … Israeli President Reuven Rivlin addressed a summit of publishers and writers of Jewish media outlets from around the world. His first and foremost words were for the Jewish media to be the eyes and ears of the Jewish community. Rivlin asked the international Jewish media to encourage their readers to report any acts of anti-semitism and provide wide and detailed coverage of these hate crimes.

The President stressed that as an Israeli and a Zionist: “I do believe that Aliya (immigration to Israel) is still the best way to express your Zionism. But I also believe that wherever you choose to live – in Europe, in America in Australia, Asia or Africa – you have the right to live as a proud Jew.”

The President continued by noting he was, “proud of the great achievements of the State of Israel.”

“Israeli society is facing many changes, and no longer has a secular majority and small religious minorities. It is a society which has four tribes; Haredi, Secular, National Religious, and Arab: all nearly the same size, with different identities. living in different cities, in different schools, and reading different newspapers.”

“The President’s Office is now organizing projects in education, academia, in employment, in sport, and in local government, across the country. In these projects we work to bridge the gaps, between religious and secular, between Arabs and Jews, and teach them; to build a shared hope.”

Rivlin stated: “As President, I am working to ‘shine a light’ on all forms of hatred and extremism, which want to tear apart our shared lives here in this land. And I see the Jewish community around the world as important partners in building this shared hope.”

The President speaking directly to the journalists said: “I have not been shy to speak out, when I see a challenge to Israel: as a Jewish or as a democratic state. And when I have, the media in Israel and around the world was quick to report it. There are many who are quick to write headlines and articles about the problems we face. But they are much slower to report the good news: the solutions to the problems. They are much slower to write about all we are doing to build a shared hope, for all Israelis.”

Rivlin concluded: “I understand the golden rule, “if it bleeds, it leads”, but friends, as the voice, eyes, and ears of the Jewish community, I urge you all: be sure you give a voice to those working for a better future. Because the world and the community looks to you.”