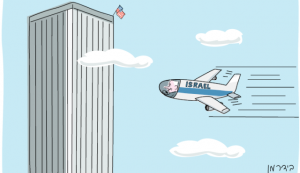 A cartoon from Qatar, Hamas, Al–Qaeda or ISIS?

Jerusalem, Israel — October 31, 2014 … Reliable sources in the Israel government have revealed that a commercial media group in Qatar have offered to buy the Israel newspaper Haaretz.

“Haaretz publisher Amos Schoken was allegedly approached in the last month and was offered  a lot of cash for the newspaper,” said the source. “The businessmen from Qatar who made the offer in Europe were heard saying: ‘Why should we attack the Zionists when they can destroy themselves?'”

Haaretz, which has a long, documented track record of attacking Israelis, published an editorial cartoon this week evoking the 9/11 attack on the World Trade Center in New York.

The cartoon, by Amos Biderman of Haaretz, shows Israeli Prime Minister Benjamin Netanyahu at the controls of an aircraft headed for a building topped by an American flag. The plane says “ISRAEL” on the side.

“The message is that Bibi is arrogantly and wantonly destroying Israel’s ties with the US and leading us to a disaster on the scale of 9/11,” Biderman explained in a tweet in Hebrew, according to Haaretz.

The cartoon was published amid attacks by the White House in which an unnamed US official reportedly called Netanyahu “chickenshit.” for not weakening Israel’s security.

Israelis were enraged with the cartoon but the hatred displayed by Haaretz towards Israel transcended Jerusalem. It directly attacked every Jew from Tel Aviv and London to Paris and New York.

The US based Anti-Defamation League demanded an apology.

“The cartoon in question is offensive on many levels,” said ADL National Director Abraham H. Foxman. “Not only does it completely misrepresent any tensions which may currently exist between the U.S. government and Mr. Netanyahu, it disrespects the memories of thousands of innocent Americans and others who tragically perished on 9/11, and the deep pain and trauma caused by the horrific attacks.”

Foxman added that the cartoon feeds conspiracy theories about the Sept. 11, 2001 attacks, which were carried out by al Qaeda terrorists.

Foxman continued: “Furthermore, as anti-Semitic conspiracy theories charging that Israel and/or Jews were behind the attacks are still believed by large swaths of the Muslim world, it is particularly jarring and incredibility irresponsible that an Israeli newspaper, especially one whose journalistic standards are widely respected, would resort to publishing such a highly offensive stereotype in the name of political satire.”

“On Thursday, Haaretz published a political cartoon that caused a backlash the likes of which make the “chickenshit” story pale in comparison. The cartoon depicts Netanyahu flying a plane into the World Trade Center. Not only is it vile in and of itself, but the fact that it appeared while Rabbi Glick remained in critical condition at Shaare Zedek hospital after an assassination attempt made it all the more repugnant.

“It was certainly not my intention to insult or upset anyone. I wasn’t sufficiently aware of the great sensitivity that 9/11 holds for Americans.”

Really. I guess he was equally unaware of the “great sensitivity” that anti-Semitic imagery holds for Jews everywhere. Apparently, he and his Haaretz cohorts are so insulated by their bubble of chattering-class respectability that they do not notice when they have gone too far.”

Blum asks: “How do you say “shitstorm” in Hebrew?”

If Qatar does buy Haaretz, one should expect greater circulation of the newspaper in Turkey, Syria, Iran and Saudi Arabia with members of ISIS, Hamas, Islamic Jihad and Al–Qaeda signing up with discounted, Groupon online subscriptions.