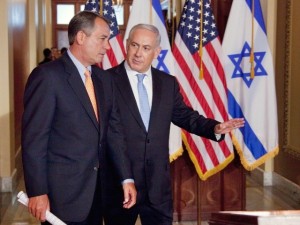 A newly released report at Politico says “some House Democrats are privately threatening to skip” Israeli Prime Minister Benjamin Netanyahu’s March 3 address, while US Vice President Joe Biden has yet to commit to attendance. They might want to rethink their position, as a new Rasmussen poll finds considerable public support for Netanyahu’s speech.

According to Rasmussen, likely voters support Netanyahu’s address to Congress over the objections of President Obama by a margin of 52 to 25%, with 23% undecided.  The poll also found 44% of voters worried that relations between the U.S. and Israel have deteriorated during Obama’s presidency, while only 9% think the relationship has grown stronger.

Some of the popular opinions on these topics could be described as superficial — in addition to partisan loyalty, there will be people who fail to see anything wrong with the leader of a major U.S. ally delivering a speech to Congress and either have not heard the White House’s complaints about broken protocols or consider such objections petty. There are plenty of people who are not quite certain what to do about Iran and have either a vague sense that Obama’s policy is adequate because there haven’t been any mushroom clouds yet or a vague sense that it is inadequate because Iranian nukes are still a hot topic of debate.

Besides the perceived slight to Obama, Democrats might be nervous that Netanyahu’s speech will make hash of not only the president’s Iranian nuclear negotiations but his entire Middle East strategy. As Rep. Robert Dold (R-IL) puts it, in a supportive piece at the Chicago Tribune:

Iran’s nuclear program is the greatest national security threat facing the United States, and it poses an existential threat to Israel. I hope that Netanyahu’s speech  serves as a wake-up call about the urgency of this situation.

We would all like to have a diplomatic solution to Iran’s nuclear program. However, after a year of negotiations with the Iranians — two extensions, billions of dollars in sanctions relief, continued enrichment and research within Iran, and a hardening of demands from the opposing side — it is not clear that we are anywhere close to a successful diplomatic outcome.

Sanctions brought the regime to the negotiating table in the first place.  Rewarding Tehran’s delay tactics with indefinite sanctions relief while  centrifuges continue to spin  weakens our hand and strengthens Iran’s — not the other way around. The swift passage of the Kirk-Menendez sanctions legislation is our best chance to help these negotiations succeed.

As for those spinning centrifuges, the Associated Press reported on Tuesday that with the “time for negotiations running short” (why would that be, exactly, if Obama’s campaign promises that Iran is a long way from nukes were true?) negotiators are looking to “break the decade-long deadlock on attempts to limit Iranian activities” that could create nuclear weapons… by working out a deal to let Iran keep its centrifuges but “reconfigure them to reduce the amount of enriched uranium they produce.”

That is a measure everyone knows is so temporary and easily reversed that it is hardly better than a symbolic gesture, a slowdown in the progress to doomsday weapons that would be measured in months. Iran, which has been happily pocketing big-dollar sanctions concessions and deadline extensions for years, does not seem inclined to jump at this latest compromise, which is very noticeably a retreat from earlier U.S. demands. The biggest dark cloud on Iran’s nuclear horizon is the collapse of oil prices, an event equally unexpected by Barack Obama, no matter how hard his flacks try to claim credit for engineering it.  Tehran is winning this showdown with Obama, and they know it.  So does Benjamin Netanyahu, and he is not shy about saying such things out loud.

Netanyahu has also been vocal in portraying Iran as the greatest Islamist threat to world peace, and not just because of their nuclear ambitions.  That’s a direct contradiction of Obama policy, which seems (to the extent that it has any real objective at all) to anticipate the rise of an Iran-dominated Shiite empire as a relatively sane Middle East hegemon the West can do business with.  Netanyahu is likely to discuss that strategy in uncomfortably blunt terms, before dismissing it with even blunter terms.

As for the proximity of Netanyahu’s speech to Israeli elections, it’s not clear whether this affair has been a net plus or minus for his Likud party.  Although the Politico piece says Netanyahu might have underestimated Obama’s post-midterm popularity and “miscalculated the backlash back in Israel from putting his relationship with the American President on the line,” Haaretz today finds “Likud gathering steam” and Netanyahu “widening his lead over his main rival, Isaac Herzog.”

A very effective campaign for Netanyahu is now in full swing with Support Netanyahu, a social media group on Facebook, leading the path.

Diplomatic and security issues are seen as a big asset for Netanyahu; with a small political headache being a weird story, possibly paid for by Obama V15 agents in Israel, about “corruption and hedonism at the Prime Minister’s residences,” but it is having little if no impact on the campaign.  It would seem, at the very least, that any displeasure is placed with Obama, and a backlash against Team Obama’s attempt to meddle in the Israeli elections.