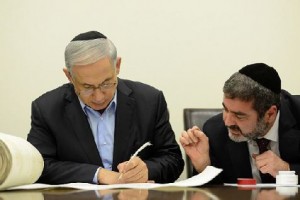 Jerusalem, Israel — February 6, 2015 … Israel Prime Minister Benjamin Netanyahu participated in a ceremony in which the last letters were written in a Torah scroll in memory of those who were murdered in last month’s terror attack at the Hyper Casher market in Paris.

This was the first of four Torah scrolls, two of which will be placed in synagogues in Paris and two at the Western Wall in Jerusalem.

“I express the feelings of the Jewish People regarding these victims, who are part of our people and who were murdered just because they were Jews, in terrible anti-Semitism that is sweeping across Europe. Many European governments are still not ready to point to the source of the new anti-Semitism – extremist Islam. To my regret, we saw an expression of this spirit yesterday at the UN, when they refused to condemn Hezbollah, which claimed responsibility for the murderous attack against our forces.

On the one hand, in Europe they refuse to call the child by its name, or at least they are not ready to grab the bull by the horns and say that the source of the new anti-Semitism and the murderous attacks that are running rampant around the world, this terrible brutality against Jews and against non-Jews, is extremist Islam.”

By the way, they say this very clearly; therefore, there is no alternative to Jews defending themselves – first and foremost in the state of the Jews. Governments that line up against this anti-Semitism will discover its source.”

The four Jewish victims of the terror attack on a kosher supermarket in Paris were buried in Israel.

Here is a look at the victims:

YOHAN COHEN — Cohen worked at the kosher grocery store that was attacked by Amedy Coulibaly. The 22-year-old was friends on Facebook with his colleague Lassana Bathily, a Muslim who saved the lives of shoppers by turning off the stockroom’s freezer and hiding them inside before sneaking out through a fire escape to brief police on the hostage-taker upstairs. Cohen loved rap music. His parents left North Africa in the 1960s to settle in the northern Paris suburb of Sarcelles.

YOAV HATTAB — Hattab finished high school in Tunisia before moving to Paris to seek a business degree in marketing. He was killed while attempting to snatch one of Coulibaly’s weapons, according to witnesses quoted in various French news media. The 21-year-old Hattab was the son of the Tunis chief rabbi.

FRANCOIS-MICHEL SAADA — Saada, a pensioner in his 60s, was murdered while buying goods for the Sabbath. Born in Tunis, the former senior manager was married to Laurence, a teacher. Their two children, Jonathan and Emilie, both live in Israel.