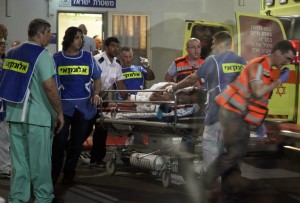 Tel Aviv, Israel — June 8, 2016 … Dressed in black suits, they ordered desserts at the Max Brenner restaurant in Tel Aviv. Many were out to relax and enjoy a beautiful summer’s evening over a fine dinner, homemade chocolate and strong Israeli coffee. As the waiter walked away with their order, two Palestinian terrorists took out automatic weapons and started to shoot at point blank range at the customers. Within a few minutes, these terrorists had murdered 4 people and wounded several others in Tel Aviv’s newly built Sarona Market complex.

Dozens of civilians, screaming, ran frantically out of the restaurant, as the terrorists continued to calmly shoot whoever was in range. Telephones throughout Israel started ringing, vibrating with urgent text messages saying “peeguya” Hebrew for terror attack. “WTF – I’m OK – shooting at restaurant. Get police.”

Tel Aviv Police head Asst.-Chief Moshe Edri described the barbaric  scene as a “serious terrorist attack.” He said that two terrorists came to the elegant market and opened fire randomly at civilians. Eyewitnesses said that the terrorists were disguised as religious Jews and wore kippot.

The Sarona Market was recently created partly from expensive property that the IDF uses as its headquarters. The highly secured, walled IDF and Defense Ministry are directly across the street.

Edri  said police have increased deployments in the city but that school would be open on Thursday and the public can keep their normal routine, though he also implored that they  exercise caution and report suspicious persons.

The two terrorists were relatives from Yata in the South Hebron Hills and were said to be in their twenties. Hebron is a known Hamas stronghold.

Shooting was also reported on Ha’arbaa Street next to the Cinematheque, where at least one of the terrorists was arrested after running from the scene.

Tel Aviv Mayor Ron Huldai said that while Tel Aviv “is a target for terrorists, we will continue to live in this city… terrorism will not defeat us and we must strive for peace.”

Dr. Pini Halperin, head of the emergency room at Ichilov Hospital, said the hospital received 10 wounded people, three of whom later died of their wounds. He said one of the terrorists was among the wounded being treated in the hospital, and was listed in serious condition on Wednesday night.

MK Amir Ohana, a former Shin Bet (Israel Security Agency) agent, drove to the site of the attack after hearing about it while in his car not far away.

“The scene was totally upside down: chairs overturned, broken glass, half-eaten cakes left on tables, and a ton of blood,” he described. “I could see that terrorists shot with automatic weapons, and they were caught soon after.”

He said there was nothing for him to do to help once he had arrived, because Magen David Adom “worked very fast, did great work.”

Netanyahu who just returned from Moscow and his new defense minister Liberman were briefed on details of the incident by the district commander of the police force.

Netanyahu was also introduced to a security guard, responsible for shooting and neutralizing one of the terrorists, who recounted the night’s turn-of-events.

“First of all, I would like to send my condolences to the families whose worlds have been turned upside down,” he said. “And wishes for a fast recovery to those that have been injured.”

He praised the bravery and quick-action of a civilian and security guard on site who, through their individual actions, saved quite a few lives. Netanyahu also praised the police officer who captured and neutralized one of the terrorists.

“We are at the peak of a difficult period,” Netanyahu said.  “We will act with resoluteness and with intelligence.”

Surveillance footage from a cafe near the shooting scene showed chaos as panicked customers knocked over chairs and tables as they rushed to escape. People crawled across the floor and others carried children in their arms.

The Jerusalem Post reported in April that Tel Aviv police wanted to close the market because of “security flaws and safety shortcomings that present a risk to the public’s safety.”

An investigator on the scene at the Tel Aviv food complex said: “These cowardly attacks against innocent civilians can never be justified,” he said. “We are in touch with Israeli authorities to express our support and concern.”

He added: “The terrorists were taken alive. They will wish it was different.”

Israeli Ambassador to the United Nations Danny Danon called on the Security Council to condemn the attack. “Today’s heinous attack sadly proves that when the international community refuses to condemn terror against Israelis, the next attack is only a matter of time,” he said in a statement.

“Terror in Tel Aviv must be treated the same as terror in Paris or Istanbul.”