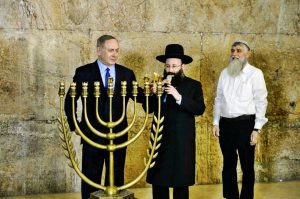 After an intense period of diplomacy that unfolded in the two days before the UNSC vote, a senior Israeli official accused the United States of abandoning the Jewish state with its refusal to block the resolution with a veto.

“Citizens of Israel, I would like to reassure you. The resolution that was adopted yesterday at the United Nations is distorted and shameful but we will overcome it, said Netanyahu.

“The resolution determines that the Jewish Quarter in the Old City of Jerusalem is ‘occupied territory’. This is delusional. The resolution determines that the Western Wall is ‘occupied territory’. This too is delusional. There is nothing more absurd than calling the Western Wall and the Jewish Quarter occupied territory. There is also an attempt here, which will not succeed, to impose permanent settlement terms on Israel. You might recall that the last one who tried to do this was Carter, an extremely hostile president to Israel, and who just recently said that Hamas is not a terrorist organization. Carter passed sweeping decisions against us at the UN of a similar kind, and this was also unsuccessful. We opposed this and nothing happened.”

“It was to be expected that Israel’s greatest ally would act in accordance with the values that we share and that they would have vetoed this disgraceful resolution. I have no doubt that the new US administration and the incoming UN Secretary General will usher in a new era in terms of the UN’s relationship with Israel,” he said.

Donald Trump, who has promised to move the US embassy in Israel from Tel Aviv to Jerusalem, and has nominated an ambassador in David Friedman who is supportive of settlers, pledged that the Palestinians would no longer have a platform at the UN when he is inaugurated next month.

“As to the U.N., things will be different after Jan. 20th,” Trump posted on Twitter.
On Saturday, Trump tweeted, “The big loss yesterday for Israel in the United Nations will make it much harder to negotiate peace. Too bad, but we will get it done anyway!”

In a Cabinet meeting held in Jerusalem today, Netanyahu said: “I share ministers’ feelings, anger and frustration vis-à-vis the unbalanced resolution that is very hostile to the State of Israel, and which the UN Security Council passed in an unworthy manner. From the information that we have, we have no doubt that the Obama administration initiated it, stood behind it, coordinated on the wording and demanded that it be passed. This is, of course, in complete contradiction of the traditional American policy that was committed to not trying to dictate terms for a permanent agreement, like any issue related to them in the Security Council, and, of course, the explicit commitment of President Obama himself, in 2011, to refrain from such steps.”

Netanyahu continued: “We will do whatever is necessary so that Israel will not be damaged by this shameful resolution and I also tell the ministers here, we must act prudently, responsibly and calmly, in both actions and words. I ask ministers to act responsibly as per the directives that will be given today at the Security Cabinet meeting immediately following this meeting. I have also asked the Foreign Ministry to prepare an action plan regarding the UN and other international elements, which will be submitted to the Security Cabinet within one month. Until then, of course, we will consider our steps.”

“Over decades, American administrations and Israeli governments had disagreed about settlements, but we agreed that the Security Council was not the place to resolve this issue. We knew that going there would make negotiations harder and drive peace further away.

And, as I told John Kerry on Thursday, friends don’t take friends to the Security Council. I’m encouraged by the statements of our friends in the United States, Republicans and Democrats alike. They understand how reckless and destructive this UN resolution was, they understand that the Western Wall isn’t occupied territory.

I look forward to working with those friends and with the new administration when it takes office next month. And I take this opportunity to wish Israel’s Christian citizens and our Christian friends around the world a Merry Christmas and a Happy New Year.”

A few hours ago, Netanyahu made an unexpected visit to the Western Wall.

Of course the Palestinians arrived much later. We were in these places. We will return to these places and I ask those same countries that wish us a Happy Hanukkah how they could vote for a UN resolution which says that this place, in which we are now celebrating Hanukkah, is occupied territory.

Netanyahu has instructed members of his cabinet to refrain from traveling to countries that voted for the UN resolution.

He also said that Israeli aid to Senegal will be canceled and that contributions Israel makes to five U.N. agencies will be halted.

In regards to Great Britain and Spain, the deputy ambassadors were summoned because their respective bosses are currently not in the country. The ambassadors of China, Russia, France, Angola, Egypt, Japan, Ukraine and Uruguay were expected to arrive in Jerusalem later on Sunday. Senegal and New Zealand do not have embassies in Israel. Venezuela and Malaysia do not have diplomatic relations with Israel.

Spoke w/ Israeli PM @netanyahu tonight to wish him Happy Chanukah & assure him of strong support in Congress. No US $ for UN until reversed.

US Texas Senator Ted Cruz called on Congress to stop all funding to the United Nations until Friday’s vote at the UN Security Council to end Israeli settlement building is reversed.

The Republican leader and former US Presidential candidate took to Twitter, saying he had spoken to Netanyahu to send him Hanukka greetings along with the assurance of “strong support in Congress.”