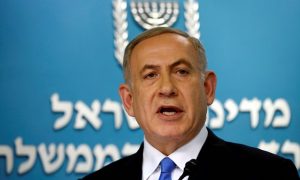 Jerusalem, Israel — December 28, 2016 … The following was communicated by the Israel Prime Minister’s office to the Israel News Agency.

Prime Minister Benjamin Netanyahu, this evening, issued the following statement in response to US Secretary of State John Kerry’s speech:

“Before I explain why this speech was so disappointing to millions of Israelis, I want to say that Israel is deeply grateful to the United States of America, to successive American administrations, to the American Congress, to the American people. We’re grateful for the support Israel has received over many, many decades. Our alliance is based on shared values, shared interests, a sense of shared destiny and a partnership that has endured differences of opinions between our two governments over the best way to advance peace and stability in the Middle East. I have no doubt that our alliance will endure the profound disagreement we have had with the Obama Administration and will become even stronger in the future.”

Netanyahu continued: “But now I must express my deep disappointment with the speech today of John Kerry – a speech that was almost as unbalanced as the anti-Israel resolution passed at the UN last week. In a speech ostensibly about peace between Israelis and Palestinians, Secretary Kerry paid lip service to the unremitting campaign of terrorism that has been waged by the Palestinians against the Jewish state for nearly a century.

What he did was to spend most of his speech blaming Israel for the lack of peace by passionately condemning a policy of enabling Jews to live in their historic homeland and in their eternal capital, Jerusalem.

Hundreds of suicide bombings, thousand, tens of thousands of rockets, millions of Israelis in bomb shelters are not throwaway lines in a speech; they’re the realities that the people of Israel had to endure because of mistaken policies, policies that at the time won the thunderous applause of the world.

I don’t seek applause; I seek the security, and peace, and prosperity and the future of the Jewish state. The Jewish people have sought their place under the sun for 3,000 years, and we’re not about to be swayed by mistaken policies that have caused great, great damage.

Israelis do not need to be lectured about the importance of peace by foreign leaders. Israel’s hand has been extended in peace to its neighbors from day one, from its very first day. We’ve prayed for peace, we’ve worked for it every day since then. And thousands of Israeli families have made the ultimate sacrifice to defend our country and advance peace.

My family has been one of them; there are many, many others.

No one wants peace more than the people of Israel.

Here’s what President Obama himself said at the UN in 2011. He said: ‘Peace is hard work. Peace will not come through statements and resolutions at the United Nations. If it were that easy, it would have been accomplished by now.’

That’s what President Obama said, and he was right. And until last week this was repeated over and over again as American policy. Secretary Kerry said that the United States cannot vote against its own policy. But that’s exactly what it did at the UN, and that’s why Israel opposed last week’s Security Council resolution, because it effectively calls the Western Wall ‘occupied Palestinian Territory,’ because it encourages boycotts and sanctions against Israel – that’s what it effectively does, and because it reflects a radical shift in US policy towards the Palestinians on final status issues – those issues that we always agreed, the US and Israel, have to be negotiated directly, face to face without preconditions.

Israel looks forward to working with President-elect Trump and with the American Congress, Democrats and Republicans alike, to mitigate the damage that this resolution has done and ultimately, to repeal it.

Israel hopes that the outgoing Obama Administration will prevent any more damage being done to Israel at the UN in its waning days. I wish I could be comforted by the promise that the US says we will not bring any more resolutions to the UN. That’s what they said about the previous resolution. We have it on absolutely incontestable evidence that the United States organized, advanced and brought this resolution to the United Nations Security Council. We’ll share that information with the incoming administration. Some of it is sensitive, it’s all true. You saw some of it in the protocol released in an Egyptian paper. There’s plenty more; it’s the tip of the iceberg.

So they say, but we didn’t bring it. And they could take John Kerry’s speech with the six points. It could be raised in the French international conference a few days from now and then brought to the UN. So France will bring it, or Sweden – not a noted friend of Israel – could bring it. And the United States could say, well, we can’t vote against our own policy, we’ve just annunciated it.

I think that the decisions that are vital to Israel’s interests and the future of its children, they won’t be made through speeches in Washington or votes in the United Nations or conferences in Paris. They’ll be made by the Government of Israel around the negotiating table, making them on behalf of the one and only Jewish state – a sovereign nation that is the master of its own fate.

And one final thought – I personally know the pain, the loss and the suffering of war. That’s why I’m so committed to peace. Because for anyone who’s experienced it, as I have, war and terror are horrible. I want young Palestinian children to be educated like our children, for peace. But they’re not educated for peace. The Palestinian Authority educates them to lionize terrorists and to murder Israelis.

My vision is that Israelis and Palestinians both have a future of mutual recognition, of dignity, mutual respect, co-existence. But the Palestinian Authority tells them that they will never accept, should never accept the existence of a Jewish state.

So, I ask you, how can you make peace with someone who rejects your very existence?

This conflict is not about houses, or communities in the West Bank, Judea and Samaria, the Gaza district or anywhere else. This conflict is and has always been about Israel’s very right to exist.

The persistent Palestinian refusal to recognize a Jewish state remains the core of the conflict and its removal is the key to peace.”

Netanyahu concluded: “Palestinian rejection of Israel and support for terror are what the nations of the world should focus on if they truly want to advance peace, and I can only express my regret and say that it’s a shame that Secretary Kerry does not see this simple truth.”