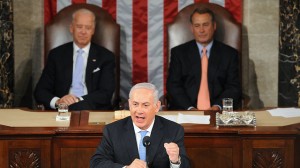 Jerusalem, Israel — February 7, 2015 … There is only one entity that truly does not want Netanyahu to address the US Congress. Iran now has 19,000 centrifuges and admits it has 1,008 IR2m machines that can produce nuclear bomb grade material five times faster.

Israeli Maj. Gen. Amos Yadlin, former military intelligence chief and executive director of the Institute for National Security Studies, states that the Iranian program is currently three to six months away from a bomb.

The primary cheerleader comes from the White House. His name is President Barack Obama and he could care less if Israel was nuked tomorrow. Instead, using every political tool he has, Obama has called for Netanyahu not to address the US Congress on Iran. Obama believes that a bad deal with Iran, giving Iran a nuclear weapon, is better than no deal.

Obama states that Netanyahu’s upcoming speech was a “departure from protocol.”

Upon closer examination and a New York Times “correction” one can see that there was no “departure from protocol” and that the White House knew in advance of House Speaker John Boehner’s invite to Israeli Prime Minister Benjamin Netanyahu to speak to a joint session of Congress.

Obama also states that he does not want to interfere in Israeli elections, with the speech coming up just a few weeks away from votes being cast. Obama knows nothing about the Israeli voter. Does he truly believe that those who live in Dimona, Beer Sheva, Hadera and Kiryat Shomona will watch Netanyahu’s speech and then decide who to vote for?

The Israeli voters know what they want. It’s security. And that is not going to change no matter how hard Obama spins ignoring the words Islamic terror while reminding Christians about the Crusades.

Netanyahu’s speech is about Iran, not Israeli elections.

It is Obama who is making it about Israeli elections. Not only has Obama tried to create the perception that the Netanyahu speech is about Israeli elections, Obama now has his own campaign people in Israel doing all they can to overthrow the Israeli government. Just ask Obama’s 2012 Field Director Jeremy Bird and his V15  staff of 40 operatives working out of the offices of One Voice in Tel Aviv.

A US President is trying to overthrow an Israeli government? The White House is trying to destroy the government of it’s best, most loyal friend in the Middle East? The only democracy in the region which could qualify for being America’s 51’st state?

But it gets even better.

It appears that the US State Department is funding the anti-Netanyahu effort through grants it has provided to the pro Palestinian, pro Hamas organization One Voice.

“There appears to be a danger that U.S. taxpayer funds are being used directly to shape the outcome of the upcoming Israeli election – and specifically the campaign against Prime Minister Netanyahu,” state Cruz and Zeldin.

Obama is now pressuring US Democrats and American Jewish leaders to boycott the speech. Vice President Joe Biden just announced that he would be traveling and cannot attend. US Secretary of State John Kerry is doing a disappearing act (no different than Paris) and ADL Director Abe Foxman is publicly requesting that Netanyahu cancel his speech.

As an American Jew who knows Foxman, this is perhaps the worst, most destructive act he has ever undertaken. Foxman, who spoke with Obama, would rather bend to Obama’s narcissistic ego than stand with Israel in it’s real time confrontation with Islamic nuclear terror.

Foxman does not have children living in Israel.

Netanyahu knows very well that there is not one hour to delay in stopping the Iranian nuclear threat. This is not nor never was about US bipartisan politics or Israeli elections.

This is about President Obama spending more time on trying to destroy an Israeli government than addressing ISIS, al-Qaeda, Hamas or Islamic Jihad.

For this reason, Netanyahu must address Congress.