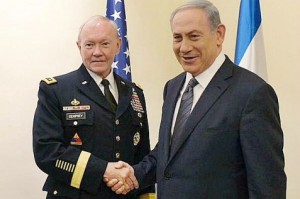 Jerusalem, Israel — June 11, 2015 … Israel Prime Minister Benjamin Netanyahu, this morning, in Jerusalem, met with US Chairman of the Joint Chiefs of Staff General Martin Dempsey and told him at the start of their meeting:

“You’ve been a wonderful friend and a grand champion of America and of America-Israel relations. Israel appreciates it. I want to take this opportunity to also express our respect and deep admiration for America’s fighting men and women. We know you’re extended around the world, including in our region.”

General Dempsey said: “The greatest gift has been the friendship that we’ve managed to forge with the leaders in the Israel Defense Forces, and I know you’re proud of them but we are too. It’s our Constitution, and you know that that’s what inspires us as I know service to your nation inspires you.”

Dempsey presented Netanyahu with a copy of the US Constitution. Netanyahu’s meeting with the US general followed Dempsey’s Wednesday meetings with IDF Chief of Staff Lt.-Gen. Gadi Eisenkot and Israel President Reuven Rivlin.

Rivlin made a point of welcoming Dempsey to “Jerusalem, the capital of the State of Israel.” He was referring to the U.S. Supreme Court ruling earlier this week that struck down an existing but unenforced law that would have let American citizens born in Jerusalem have Israel listed as their country of birth in passports.

“I am a seventh-generation Jerusalemite, and even though I was born nine years before the State of Israel was established, I was born in Jerusalem and I am Israeli,” Rivlin said.