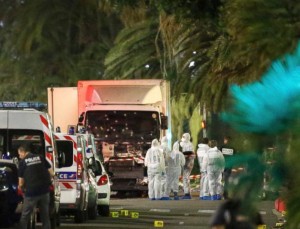 We are again reminded that terrorism can strike anywhere and must be fought everywhere.

Israelis stand united with the people of France today. We join you in mourning those who were killed and wish a speedy recovery to the wounded.

Israel is ready to help the French government fight this evil until it is defeated.”

Mohamed Lahouaiej Bouhel, 31, a Nice resident born in Tunisia, has been identified as the Islamic terrorist through fingerprints, French prosecutor François Molins said Friday.
The terror attack began around 10:45 p.m. Thursday, with Bouhel driving a rented, refrigerated truck. Ten children are among the 84 people murdered in Thursday’s terror attack in Nice. Another 202 people were injured, including 52 critically. Among the 52 critically injured, 25 are in a coma.
Israeli security experts state that two elements contributed to allowing the attack to take place – a massive intelligence failure and a relaxed attitude toward Islamic terror organizations.
French officials recently met with the Islamic terror group Hezbollah.
Israel’s Foreign Ministry released a statement urging France to follow the example of Arab states that have blacklisted Hezbollah as a terror organization.“It’s a shame that the French foreign minister didn’t consult with Arab states that do not make a distinction between the military and political arms of Hezbollah,” read the Tuesday statement. “It’s clear that Foreign Minister Ayrault would not meet with the ‘political wing’ of Islamic State.”

In May the Arab League declared the Lebanon-based Shiite group a terrorist organization, with all but two of the 22-member bloc voting for the resolution. The declaration came a little over a week after the predominantly Sunni Gulf Cooperation Council took a similar stance by blacklisting the group.

One in six French citizens sympathises with the Islamic terror group ISIS, also known as Islamic State, a poll released this week found.The poll of European attitudes towards the group, carried out by ICM, revealed that 16% of French citizens have a positive opinion of ISIS. This percentage increases among younger respondents, spiking at 27% for those aged 18-24.

Security experts in Israel question why French security has not taken action against these ISIS supporters.