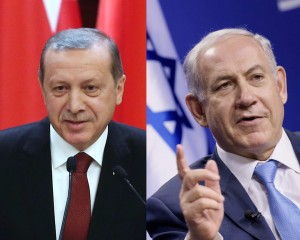 Jerusalem, Israel — June 27, 2016 … Turkey announced the restoration of diplomatic relations with Israel today after a six-year break in ties. Turkey is seeking to ease a sense of isolation on the world stage as Israel views enormous financial and security benefits.

“Israel has reached an agreement of strategic importance for the State of Israel, for security, for regional stability and for the Israeli economy. As Prime Minister of Israel, it is my responsibility to be concerned with its strategic interests, to take a broad and long-term view, based on an understanding of the international arena as well as of our security and economic needs, at present and in the future.

Last night and this morning, I spoke with US Secretary of State John Kerry. Last night I spoke with US Vice President Joe Biden and have spoken just now with Italian Prime Minister Matteo Renzi. Of course, they all welcomed the agreement. They think that it will greatly strengthen the State of Israel and its position in the region. Of course, the US says this based on that same strong and fundamental alliance that is a cornerstone of our international relations. But we know that we need to add centers of stability. The world and the Middle East are in turmoil and my policy is to create centers of stability in this unstable and stormy region.

We are doing so with our close neighbors, Arab countries. We are doing so with Greece and Cyprus. We are doing so with Russia. We are also doing so with Turkey. Of course, we are doing all of this in full coordination with our greatest ally, the United States. This is part of a clear strategy, to create centers of stability in the stormy Middle East. Now, Israel and Turkey are two major powers in the region and the break between us is not good for our vital interests and prevents us from cooperating in those instances, and there are more than a few, in which cooperation is warranted.

The first thing in this agreement is protection for IDF commanders and soldiers from criminal and civil claims, both those being prosecuted now and those that might be prosecuted in the future. As of now there are very many such claims and their scope is increasing; they could reach many millions of dollars and prevent the free movement of our soldiers, their freedom of activity – all of this is cancelled. The agreement will ensure that our soldiers and commanders will not be exposed to claims by Turkey. Moreover, the agreement also stipulates that the Turkish parliament will pass a law cancelling all of these processes in Turkey.

The second thing that this agreement gives is maintaining the maritime security blockade of the Gaza Strip. This is our supreme security interest; I was not prepared to compromise on it. This interest is vital to prevent the strengthening of Hamas and it remains as it has been. Of course, we are allowing ships to dock at Ashdod port and unload civilian and humanitarian cargoes there for the Gaza Strip. We have never prevented this, of course, and we are making it possible now.

The third thing that this agreement does, along with maintaining the security arrangement, is to allow for dealing with humanitarian issues in the Gaza Strip, subject to Israel’s security procedures and considerations.

Therefore, it is in Israel’s clear interest to deal with the water problem in the Gaza Strip.

Electricity: When there is not enough electricity, various problems arise, including those having to do with sanitation, and when there are outbreaks, the outbreaks do not stop at the fences. This is both a humanitarian interest and an outstanding Israeli interest. Therefore, we are allowing these infrastructures to be dealt with. Just like other countries, from Norway to Arab states, so too will Turkey be able to help on this matter. Of course, we will hold discussions with Turkey on these issues.

An additional thing that the agreement gives is a commitment to prevent all terrorist or military activity against Israel from Turkish soil, including collecting funds for these purposes. This is an important – even primary – commitment that we have not had up until now.

In addition, we received a letter according to which the President of Turkey has instructed the relevant Turkish agencies to assist in every way in returning the prisoners and MIAs on a humanitarian basis. I understand the suffering of the families. I speak with them and I know what they are going through, and I would like to assure them: I promise you, members of the families, I promise you that we will not stop and we will not rest until we bring the boys back home. This is a personal, national and moral commitment. I think that the letter which accompanies the agreement gives us another tool to use in this holy work.

Also, this agreement requires Turkey to assist Israel in entering into all international organizations that Turkey is a member of. Now, we have already had one case before the signing which is very important from our point-of-view and it is based on goodwill, and this is Turkey dropping its opposition to Israel establishing a NATO office. Israel is now working to open an office with NATO; this has been a goal of ours for many years and it is being realized.

I would like to touch on an additional point, which I think is critical, and this is in the economic sphere. This agreement opens the way to cooperation on economic and energy matters, including the gas issue. Gas is so important and contains the possibility of strengthening the Israeli economy and state coffers with vast capital. But the gas issue is composed of several things: One, extracting it from the sea and we have dealt with this; I will not go into detail on this issue here. But the second thing is creating markets for the gas that we are extracting from the sea. I remind you that 60% of every shekel that comes out of the sea goes to the state treasury. These are vast sums but we need markets. Leviathan could supply both the Egyptian market that we intend to work with and also the Turkish market as well as the supply of gas through Turkey to Europe, and this is a strategic issue for the State of Israel. This could not have come sooner without this agreement and now we will work to advance it.

I updated the leaders of Egypt, Jordan, Cyprus, Greece, Russia and, of course, our American friends, on this development. We updated them on every aspect that we focused on in this agreement. This took a lot of time, including recently. But I would like to update you on something: There are two people here who worked very hard on this matter. I would like to thank Yaakov Nagal from the National Security Council, who did very loyal – and I must say quiet – work. I would also like to thank someone who, not for the first time, has aided the State of Israel, and he has done exceptional work, Yossi Ciechanover. Yossi did marvelous work dealing with the Palmer reportin wake of the Marmara incident. He dealt with it, the results are known, one of the few cases in which Israel came out on top in a UN report, and this was greatly due to Yossi. Yossi worked diligently on this agreement and I want to offer him the heartfelt gratitude of the citizens of the State of Israel. Thank you to you both.”