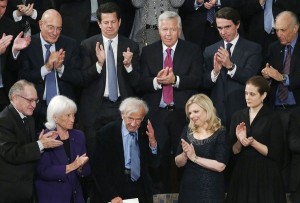 Elie Wiesel shows his support for Prime Minister Netanyahu as he warns the
US Congress of a second Holocaust created by Iran’s nuclear terror program.

“The State of Israel and the Jewish people mourn the passing of Elie Wiesel. Through his unforgettable books, moving words and personal example, Elie personified the triumph of the human spirit over the most unimaginable evil. Out of the darkness of the Holocaust, Elie became a powerful force for light, truth and dignity. His life and work were a great blessing to the Jewish people, the Jewish state and to all humanity.

I feel fortunate to have known him and to have learned from his prodigious wisdom. On behalf of all the people of Israel, Sara and I send condolences to the entire Wiesel family. May the memory of Elie Wiesel, a towering spirit who taught us all to remember, be forever blessed.”

A quiet man who moved like a giant. Elie Wiesel, the Auschwitz survivor who became an eloquent witness for the six million Jews murdered in World War II and who, more than anyone, seared the memory of the Holocaust on the world’s conscience, died on Saturday at his home in Manhattan. He was 87.

It was Elie’s speaking out against forgetfulness and violence that the Nobel committee recognized when it awarded him the peace prize in 1986. “Wiesel is a messenger to mankind,” the Nobel citation said. “His message is one of peace, atonement and human dignity.
His belief that the forces fighting evil in the world can be victorious is a hard-won belief.”

“Never shall I forget that night, the first night in camp, which has turned my life into one long night, seven times cursed and seven times sealed,” Wiesel wrote.