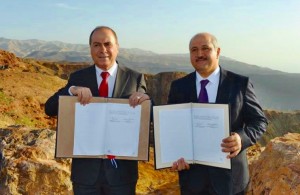 NATIONAL INFRASTRUCTURE, Energy, and Water Minister Silvan Shalom (left) and his Jordanian counterpart, Water and Irrigation Minister Hazim el-Naser, display the agreement yesterday after signing on the eastern side of the Dead Sea. (photo credit:HAIM ZACH/GPO)

Jerusalem, Israel — February 27, 2015 … Part of the following was communicated by the Regional Cooperation Ministry to the Israel News Agency.

Regional Cooperation Minister Silvan Shalom signed the ‘Seas Canal’ agreement with Jordanian Water and Irrigation Minister Hazim El-Naser at a ceremony attended by dignitaries from both sides as well as representatives from the World Bank and the US embassies in Israel and Jordan.

The agreement sets relations between Israel and Jordan regarding implementation of the first stage of the ‘Seas Canal’ project, including the construction of a desalination plant north of Aqaba that would supply water to the Aravah region in Israel and to Aqaba in Jordan. Residual saline brines will be piped to the Dead Sea via an approximately 200-km pipeline from the Red Sea to the Dead Sea in order to stabilize and save the latter.

In the framework of the agreement, water from northern Israel will be piped to Amman. The effect of the process on the Dead Sea, as well as other environmental affects, will be monitored and studied.

Jordanian Minister El-Naser said that Jordan welcomed the cooperation that would lead to the strengthening of bilateral links and facilitate joint dealing with the water problem in the region.

Minister Shalom said: “I stand here very moved by this historic signing of an agreement on a joint project to build a canal between the seas. Today we are realizing the vision of Binyamin Zeev Herzl, the father of the state, who in the late 19th century saw the need to revive the Dead Sea. This is the most important and significant agreement since the peace treaty with Jordan. This is the peak of fruitful and very good cooperation between Israel and Jordan and will assist in rehabilitating the Dead Sea and in resolving water issues in Jordan and the Aravah.”