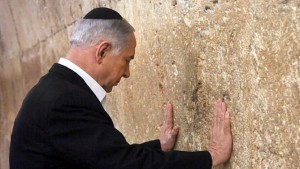 Jerusalem, Israel — February 28, 2015 … Part of the following was communicated by the Israel Regional Cooperation Ministry to the Israel News Agency.

Prime Minister Benjamin Netanyahu, this evening, on the eve of his departure for the US, visited the Western Wall in Jerusalem, and made the following remarks:

“On the eve my trip to the US, I came here to the Western Wall. I would like to take this opportunity to say that I respect US President Barack Obama. I believe in the strength of the relationship between Israel and the US and in their strength to overcome differences of opinion, those that have been and those that will yet be.”

Netanyahu continued: “As Prime Minister of Israel, it is my obligation to see to the security of Israel; therefore, we strongly oppose the agreement being formulated with Iran and the major powers, which could endanger our very existence. In the face of this danger we must unite and also explain the dangers stemming from this agreement, to Israel, to the region and to the world.”

“My responsibility is to worry not only about the State of Israel, but also the future of the Jewish people,” Netanyahu said.  “To stand up and raise our voice. Seventy, eighty years ago no one could raise their voice when there were plans to destroy us. Today there is, and it is my obligation.”

Netanyahu will arrive in Washington Sunday afternoon, and deliver a speech to AIPAC’s annual policy conference Monday morning that will focus on the strength of the US-Israel relationship. He is scheduled to have lunch with a bipartisan group of Congressional leaders on Tuesday afternoon after delivering his address to Congress, and then fly back to Israel. 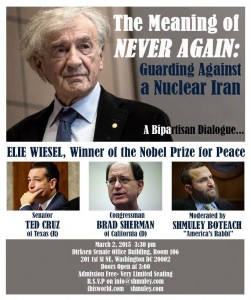