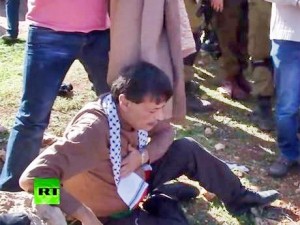 Ziad Abu Ein holding his chest as he dies from a heart attack.

Jerusalem — December 11, 2014 … Part of the following was communicated by the IDF to the Israel News Agency.

“Yesterday, December 10, rioters gathered in Turmus Ayya, near Ramallah. Israeli security forces halted the progress of the rioters into the civilian community of Adei-Ad. The IDF is reviewing the circumstances of the participation of Ziad Abu Ein, and his later death.

Following the incident, the Coordinator of Government Activities in the Territories, Maj. Gen. Yoav (Poli) Mordechai, and his Palestinian counterpart, Hussein Al-Sheikh, agreed that an Israeli pathologist would join a delegation of pathologists from Jordan, for a joint examination of the circumstances of Ziad Abu Ein’s death.

The death of Ziad Abu Ein was caused by a blockage of the coronary artery (one of the arteries that supplies blood to the heart) due to hemorrhaging underneath a layer of atherosclerotic plaque. The bleeding could have been caused by stress.

These preliminary findings will require verification after the results of the investigation and lab results are received.”

Dr. Hen Kugel, the Israeli doctor who took part in the autopsy, said that the report was not final and that they were awaiting on the return of some tests, however “we know what happened there – he died from a heart attack. He had significant blockage of the arteries and his heart was in bad shape. When they grabbed his neck it caused massive stress which led to bleeding and then full blockage which is what killed him.”

“There is no disagreement with the Palestinians about this. He died because of his heart and stress,” Dr. Kugel said.

Abu Ein spent several years in an Israeli prison for his role in a 1979 terrorist attack in Tiberias. A group of youngsters were celebrating Lag Ba’omer in the city center when a bomb exploded in their midst. Two 16-year-olds – Boaz Lahav and David Lankri – were murdered and 36 other youths wounded.

After the attack, he fled to the US. In 1981, he became the first Palestinian ever to be extradited from the US to Israel. A year later, Abu Ein was sentenced to life imprisonment but was released in the 1985 Jibril prisoner exchange deal.