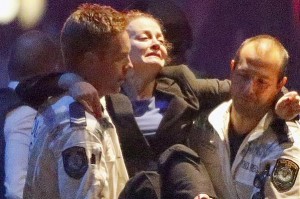 Rome — December 15, 2014 … Part of the following was communicated by the Israel Prime Minister’s Office to the Israel News Agency.

“I would like to send my condolences to Australian Prime Minister Tony Abbott and to the Australian people over the loss of innocent life. International Islamic terrorism knows no borders; therefore, the struggle against it must be global.

Australia is waking up to the news that two hostages and the Islamic terrorist at the center of the Sydney siege have died.

NSW Premier Mike Baird said he had the “heaviest of hearts”.

Netanyahu added: “This afternoon I met with Italian Prime Minister Matteo Renzi. This was our first meeting since he was elected Prime Minister and it was very good. Israel and Italy have much in common and many joint interests and we decided to expand cooperation in very many areas and on all levels.

I come here from a serious conversation with US Secretary of State John Kerry. We discussed a range of issues including Iran, Syria, the war against ISIS and others. Of course, we also discussed at length the Palestinian issue.

Netanyahu angrily rejected a Palestinian bid to create a UN deadline for an end to Israel’s so-called occupation as he headed to Rome for talks with Kerry.

“We will not accept attempts to dictate to us unilateral moves on a limited timetable,” Netanyahu said in a statement before flying to Italy.