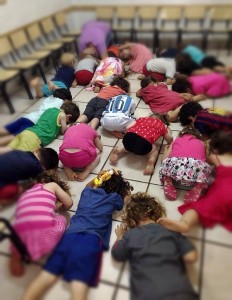 Jerusalem, Israel — July 15, 2015 … There are five reasons why Israel’s children reject Obama’s and the EU’s nuclear deal with Iran.

1. The deal allows Iran to maintain it’s nuclear program. My mommy and daddy told us that they burn American and Israeli flags in the Iran. Is that true?

2. If inspectors want to check Iranian nuclear sites they must give almost a month’s notice to do so. Isn’t that enough time for the Iranian scientists to play hide and seek. We love hide and seek but not with nuclear bombs.

4. Iran will be able to produce nuclear weapons in a few years. They will be able to buy and sell all kinds of weapons. They can start to finish building intercontinental ballistic missiles which can murder my family in Europe and in America.

5. We don’t like hearing air raid sirens, getting on the floor and covering our heads. We want to live in peace and security.  President Obama’s children have security, don’t they? Why can’t we?

We want to grow up.