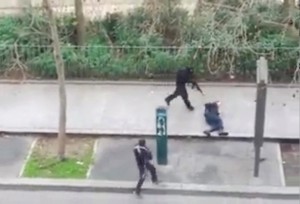 Jerusalem — January 9, 2015 … Israel Prime Minister Benjamin Netanyahu has met with French Ambassador to Israel Patrick Maisonnave and made the following remarks at the start of their meeting:

“I wish to send from this place our deepest condolences to President François Hollande, the bereaved families and the people of France. We grieve with our French brothers and sisters. We reaffirm our commitment to work together to defeat the enemies of the democratic values we all cherish.

I know that you’re going from here to France, and I want you to take with you the sentiment of every citizen of Israel. We have experienced such attacks, we know the feeling, and we share your grief, but also your resolve, which has been demonstrated in the last few days by so many of France’s citizens who gathered to say, we have to fight these enemies of our common civilization.

These terrorists gun down journalists in Paris; they behead aid workers in Syria; they kidnap schoolgirls in Nigeria; they bomb churches in Iraq; they slaughter tourists in Bali; they rocket civilians from Gaza; and they strive to build nuclear weapons in Iran.

They might have different names: ISIS, Boko Haram, Hamas, al-Shabab, al-Qaida, Hezbollah. But all of them are driven by the same hatred and blood-thirsty fanaticism. And all of them seek to destroy our freedoms and to impose on all of us a violent, medieval tyranny.

This is a global struggle.

Bringing to justice the Paris murderers is just the beginning.

It must be followed by a broad based assault on the forces of radical Islam throughout the world.

This is everybody’s battle.

This is the essence of the battle that we’re fighting: Freedom against barbarism. Freedom must win, but to win, we have to stand together and fight together.

Please convey the message of the people of Israel to the people of France, and our solidarity against all those who wish to extinguish our freedoms.

And the third most important point is we have to unite to roll back this side of fear. And I think that you can go from here to Paris armed with the knowledge that the people of Israel believe strongly in what I’ve just said, embrace the people of France as brothers and sisters. We understand we are in a common battle for our democratic values and a common battle for our future, and we refuse to be intimidated.” 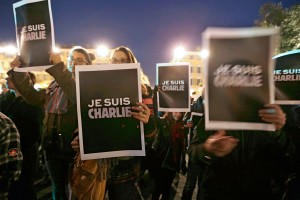 French police confronted two separate, but related hostage situations today, after a Jihadist couple which murdered a cop a day earlier stormed a Paris Kosher deli, murdering four and taking several prisoners even as the suspects of Wednesday’s massacre at a Paris satirical magazine were holed up in a printing plant 25 miles north of the city.

Authorities in France fear that all four suspects knew one another and were are bent on going out as martyrs, and potentially killing hostages and police officers in the process. The fast-moving developments came as nearly 90,000 police and military personnel were deployed to bring the terror crisis that has gripped the European nation since late Wednesday morning, when a pair of brothers conducted a bloody commando-style raid on the offices of Charlie Hebdo, a weekly satirical magazine that had angered Muslim radicals by repeatedly publishing images of Prophet Muhammed.

With stun grenades and gunfire, security forces ended three days of terror around Paris, killing the two al-Qaida-linked brothers. A member of the al-Qaida in the Arabian Peninsula gave a statement in English to The Associated Press saying the group’s leadership “directed the operations and they have chosen their target carefully.” 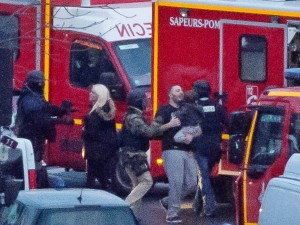 This was the worst terrorist violence France has seen in decades, killing at least 20 people, including three terrorists. A fourth suspect — Hayat Boumeddiene, the common law wife of the market attacker — was still at large and believed to be armed.

A Facebook page exposing Islamic terrorism by the Palestinian Authority and Hamas can be accessed through PalestinianWarCrimes.com.