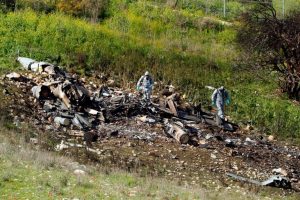 Pieces of an Israeli F-16 that crashed in northern Israel on Saturday after coming under anti-aircraft fire. The pilot ejected, according to a military spokesman.
Photo: Jack Guez/AFP

Jerusalem, Israel — February 10, 2018 … Iran attacked Israel with an armed drone as it entered the skies over Northern Israel. The Israel Defense Forces responded by shooting the drone down and targeting the Iranian drone control station in Syria. Israeli civilians then came under fire by Syrian and Iranian rockets which resulted in Israel dispatching several fighter jets to destroy the missile and anti-aircraft stations. One Israeli F-16 was shot down over Israel with both pilots ejecting.

The IDF said that the jet had crashed after the formation it was flying in was targeted by Syrian ground antiaircraft fire.

IDF Spokesman Lt. Col. Jonathan Conricus said the two pilots had bailed from the downed aircraft “as per procedure.” One pilot was severely injured as a result of “an emergency evacuation,” he said.

“Iran is responsible for this severe violation of Israeli sovereignty,” said Conricus.
“We are willing, prepared, and capable to exact a heavy price on anyone that attacks us. However, we are not looking to escalate the situation.”

Rivlin commended Israel’s security forces for their firm and resolute defense measures in the face of further proof of the danger of Iranian consolidation in the region, which the State of Israel would not allow.

The President asked them to convey the appreciation and thanks of the entire nation to the commanders and soldiers, and to all the forces working to defend Israel, for their full control over the operational events, and for the greatly valued return to calm for all the residents of the north and the many travelers who visited the area.

In the last hour, the President spoke with the pilot who was lightly injured. The President thanked him and heard from him about his recovery.

“My heart is with you and your comrades, and I hope that I will meet you soon. You and the entire squadron have proven that you do not come back until your mission is fulfilled, and I thank God together with the entire nation that you have returned.”

“I have been warning for some time about the dangers of Iran’s military entrenchment in Syria. Iran seeks to use Syrian territory to attack Israel for its professed goal of destroying Israel. This morning Iran brazenly violated Israel’s sovereignty. They dispatched an Iranian drone from Syrian territory into Israel. And this demonstrates that our warnings were 100 percent correct. Israel holds Iran and its Syrian hosts responsible for today’s aggression. We will continue to do whatever is necessary to protect our sovereignty and our security.”

Israeli security sources have confirmed that IDF reserves have been placed on high alert and are reinforcing both the Lebanese and Syrian borders.