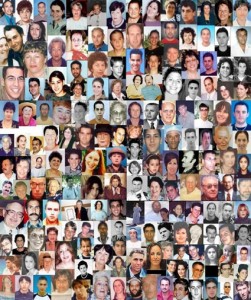 The faces of innocent, Jewish civilians
murdered by the Palestinian Authority / PLO.

New York — February 24, 2015 … A U.S. federal court has decided that the Palestine Liberation Organization and the Palestinian Authority are liable for six terrorist attacks in Israel that murdered and wounded Americans more than a decade ago.

A jury in Manhattan on Monday awarded $218.5 million in damages for the attacks, which occurred from 2002 to 2004. Several Americans were among the more than 30 people murdered and hundreds wounded. Lawyers said the judgment would probably triple to $655 million under the provisions of the U.S. Anti-Terrorism Act.

Attorneys for the plaintiffs hailed the decision as “historic.” Israeli Foreign Minister Avigdor Lieberman called it “a moral victory for victims of terror.”

Israel Prime Minister Benjamin Netanyahu responded: “The US federal court decision determines the responsibility of the Palestinian Authority for the murderous terrorist attacks of the previous decade.”

Netanyahu added: “Instead of drawing the requisite lesson, the Palestinian Authority is advancing steps that endanger regional stability such as the hypocritical application to the International Criminal Court even as it is allied with the Hamas terrorist organization. We expect the responsible elements in the international community to continue to punish those who support terrorism just as the US federal court has done and to back the countries that are fighting terrorism. Today as well we remember the families that lost their loved ones; our heart is with them and there is no justice that can console them.”