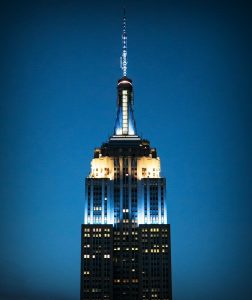 New York’s Empire State building is lit up in blue and white in honor of
Israel’s 69th birthday and 50 years of the reunification of Jerusalem.

The gala parade will consist of 40,000 marchers from more than 250 organizations, hundreds of thousands of spectators, 15 world-class marching bands and more than 30 floats.

Also marching in this year’s parade will be members of the Maccabi USA team set to compete in the 20th World Maccabiah Games in July who will also be joined by US swimming gold medalist Lenny Krayzelburg and Israeli judoka bronze medalist Arik Ze’evi.

In honor of the Celebrate Israel Parade and the state of Israel, the Empire State Building will shine its world-famous tower lights blue and white on Saturday, June 3.

Security will be extensive with thousands of NYPD uniformed and plain clothes officers and members of Israel’s elite security forces patrolling the event.

This year, Maimonides Medical Center is the Celebrate Israel Parade’s Official Television Broadcast Partner. The parade is produced in partnership with the UJA-Federation of New York and the State of Israel.

The Jewish News Agency will be providing a live Twitter feed at twitter.com/JewishNewsUSA