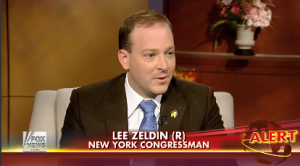 Zeldin: “It’s abundantly clear that OneVoice, a US taxpayer non-profit,
is fully engaged in political activities to oust the Israeli Prime Minister.”

Washington — March 16, 2015 … U.S. Senator Ted Cruz, R-Texas, and U.S. Congressman Lee Zeldin, have sent a letter to IRS Commissioner John Koskinen asking for information regarding the tax-exempt status of The PeaceWorks Network Foundation, most commonly known by the name “OneVoice,” after several media reports indicating OneVoice, a tax-exempt 501(c)(3) organization, has been using its resources to influence the outcome of the upcoming Israeli elections.

“The Islamic Republic of Iran is pursuing the deadliest weapons on the planet, and there can be no doubt that their first target will be Israel, followed by the United States,” said Sen. Cruz. “Yet the Obama Administration seems much more interested in regime change in Jerusalem than in Tehran. In January, Rep. Zeldin and I sent a letter to Secretary of State John Kerry asking for information about whether the United States government is funding overtly political action in Israel designed to influence the upcoming election. While we still don’t have complete answers from Sec. Kerry, OneVoice’s actions raise significant questions about whether it has violated its tax-exempt status as a 501(c)(3) organization.”

“It is important for IRS Commissioner Koskinen to assist with our efforts to hold OneVoice responsible for any possible violation of its tax exempt status. U.S. law must always be consistently enforced, and the IRS Commissioner must not make any special exception for OneVoice.”

As specified in the letter, a recent article in the Israeli ultra Left wing newspaper Haaretz reports that a U.S. taxpayer-funded non-profit organization called OneVoice is actively working with a campaign operation called Victory 2015 (V15) in an effort to influence the upcoming elections in Israel on March 17, 2015.

The letter continues: “Other media reports indicate that OneVoice ‘helped build the social network group [V15] into a proper campaign organization,’ and that ‘OneVoice has and still supports, according to statements it has also issued on its own behalf, the V15 campaign intended to topple Prime Minister Benjamin Netanyahu, openly and declaratively.’ Another source has reported that one of the founders of V15 confirmed in an interview that V15 receives financial support from OneVoice:

V15 itself says that it is supported by the OneVoice organization. Nimrod Dweck, one of the founders of V15, told Israel’s Channel 2 anchor, Keren Neubach, that ‘OneVoice writes our receipts. They are our legal-organizational conduit.’ (emphasis added)”

The Internal Revenue Code clearly states that organizations that are exempt from the collection of income tax under Section 501(c)(3) may “not participate in, or intervene in (including the publishing or distributing of statements), any political campaign on behalf of (or in opposition to) any candidate for public office.” This is an absolute prohibition, and the tax-exempt status of any organization that violates it is subject to revocation. As a result, Sen. Cruz and Rep. Zeldin requested that the IRS undertake the following preservation efforts, effective immediately:

Preserve all documents and records, including e-mail, e-mail-based calendar appointments, electronic documents, and other electronic data (electronic records), created since the date of The PeaceWorks Network Foundation’s request for non-profit organization status under Section 501(c)(3) of the Internal Revenue Code that relate to OneVoice.  For the purposes of this request, “preserve” means taking reasonable steps to prevent the partial or full destruction, alteration, testing, deletion, shredding, incineration, wiping, relocation, migration, theft, or mutation of electronic records, as well as negligent or intentional handling that would make such records incomplete or inaccessible.

Exercise reasonable efforts to identify and notify former Treasury employees and contractors, subcontractors, and consultants who may have access to such electronic records that they are also to be preserved.

If it is the routine practice of any Treasury component, employee, or contractor to destroy or otherwise alter such electronic records, either halt such practices immediately, or arrange for the preservation of complete and accurate duplicates or copies of such records, suitable for production if requested.

Cruz and Zeldin also requested that the IRS answer the following questions and provide the following information no later than March 9, 2015:

A copy of The PeaceWorks Network Foundation’s (or any component or subsidiary organizations’, including any of the “OneVoice” organizations’) Internal Revenue Service Form 1023 and related documentation.

IRS’s position on whether The PeaceWorks Network Foundation’s (or any component or subsidiary organizations’, including any of the “OneVoice” organizations’) activities, as discussed in the provided public domain news accounts, indicate that the organization may be engaged in political activity.

IRS’s position on whether it considers The PeaceWorks Network Foundation’s (or any component or subsidiary organizations’, including any of the “OneVoice” organizations’) political activities violate its tax-exempt status as a non-profit organization under 26 U.S.C. 501(c)(3).

What, if any, steps the IRS is taking to investigate The PeaceWorks Network Foundation’s (or any component or subsidiary organizations’, including any of the “OneVoice” organizations’) potential engagement in political activities, as described above.

In the letter, Cruz and Zeldin wrote, “Of course, private American citizens are free to engage in political activities according to their inclinations. It is not the role of the IRS to limit the free speech protections of the First Amendment or target organizations for their political beliefs. But in this case, OneVoice has not only received State Department grant funding for its activities, but is also potentially using its grant funding to directly impact a foreign election, and that, on its face, violates its status with the IRS.”