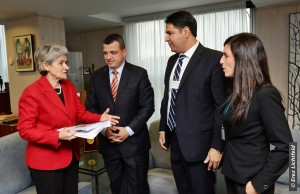 Jerusalem, Israel — October 26, 2016 … On Tuesday October 26, 2016,  the International Legal Forum (ILF) and Israel’s delegation to the United Nations Educational, Social and Cultural Organization (UNESCO) will officially submit a protest petition to UNESCO’s Director General, Irina Bokova. It carries the signatures of nearly 100,000 Jews and Christians calling upon UNESCO to recognize the deep historic, cultural and religious connection between the Jewish people and the land of Israel.

Carmel Shama Hacohen, Ambassador and Permanent Delegate of Israel to UNESCO, Yifa Segal, Director of the ILF, and along with Shahar Azani, StandWithUs’ Northeast Executive Director  will officially submit the petition, which objects to the mendacious UNESCO draft resolution that erases the 3,000-year-old Jewish connection to Jerusalem.

The resolution was voted on Wednesday, October 26, 2016. https://www.change.org/p/unesco-stop-denying-the-jewish-connection-to-israel-and-the-holy-sites

As Jews and Christians present their petition protest several members of UNESCO who object to the Palestinians attempting to sever all historic Jewish and Christian ties to Jerusalem are now receiving death threats.

“The director general has received death threats and her protection has had to be reinforced,” Carmel Shama HaCohen said on Israel Radio.

“These threats were made after her criticism” of two resolutions adopted last week at committee stage ahead of a final vote, HaCohen said, accusing Arab countries of “appalling conduct” over the drafts.

Bokova stated: “Nowhere more than in Jerusalem do Jewish, Christian and Muslim heritage and traditions share space. To deny, conceal or erase any of the Jewish, Christian or Muslim traditions undermines the integrity of the site, and runs counter to the reasons that justified its inscription on the UNESCO World Heritage list.”

“To say that the Jewish people have no connection to Jerusalem is like saying that the sun creates darkness,” Renzi said.

Italy abstained from voting on the resolution. Mexico and Brazil, which both voted in favor, later said they regretted the decision to do so and would abstain from similar votes in the future.

UNESCO was created with the clear mandate to build bridges between nations, protecting heritage and supporting cultural diversity. The Temple Mount is the holiest place in the world for the Jewish people where, according to Jewish, Greek, Roman, Christian and Islamic sources, two Jewish Temples stood.  By deliberately ignoring the over 3,000-year-old Jewish connection to the Temple Mount, UNESCO violates the basic human rights of Jews everywhere, as well as those of other religions whose beliefs and heritage include the spiritual and historical connection of the Jewish people to Jerusalem. In addition, such unfounded and erroneous resolutions not only distort history, but undermine UNESCO’s own mandate to bring nations together, and support incitement and anti-Semitism which might lead to violence. 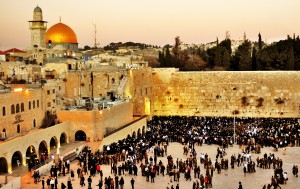 “This petition is yet another manifestation of the deep bond between Jerusalem and the Jewish people,” said Israeli Amb. Shama-Hacohen. “The list of states and leaders expressing remorse for their past votes and object to the Arab proposals is getting longer and longer. Whomever thinks Italy’s Prime Minister was the last surprise in this regard for the Arabs, will find themselves surprised again and again. The petition presents a strong moral voice, much more than the immoral Arab proposal trying to erase 3000-year-old history with ignorance and insolence.”

“Israel respects Muslim and other faiths and their presence in our holiest of places, and it is tragic that the other side doesn’t have a leadership which will do the same, but rather one which is engaged only in doing the exact opposite. This is no longer an Israeli-Palestinian struggle, but an Arab struggle against the entire Jewish world. It is clear that Israel and the Jewish people will survive this, yet it remains unclear whether UNESCO will. Israel would like to express its profound appreciation for the organizers of this proper and sound petition, who made their way here to send a clear message to the world: we shall all defend the Jewish connection with Jerusalem, no matter where we are around the world.”

Mexico’s ambassador to UNESCO Andres Roemer walked out of last week’s vote in Paris in what appears to have been a personal protest against his country’s decision to vote in favor of the text. The ambassador, who is Jewish, then apparently contemplated resigning his post, but was urged not to by HaCohen, who wrote him a personal letter praising him as a friend of the Jewish state.

Twenty-four countries voted in favor of the resolution. Six nations (including the US, Germany and Britain) voted against and another 26 abstained.

Israel informed Bokova on Friday that it was suspending its cooperation with UNESCO over the vote, with Education Minister Naftali Bennett calling the motion a denial of history that “gives a boost to terrorism.”

“This petition reflects the views of millions of people around the world, who are unwilling to accept destructive resolutions that attempt to rewrite history,” said Segal. “Such resolutions are dangerous and undermine the very reasoning behind the existence of international organizations such as UNESCO”.

The International Legal Forum (ILF), is a pro-active legal hub for lawyers, organizations and activists from around the world joining in the battle for human rights, justice and equality in Israel and the Middle East.