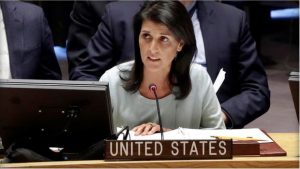 Nikki Haley: “When someone issues a false and defamatory report
in the name of the U.N., it is appropriate that the person resign.”

Geneva — March 17, 2017 … UN Watch, a non-governmental, civil rights organization, welcomed today’s resignation by Rima Khalaf from her post as head of a Beirut-based UN agency, comprised of 18 Arab states, after what she described as pressure from Secretary-General Antonió Guterres to withdraw a report accusing Israel of “apartheid.”

The report appears to have been deleted today from the U.N. ESCWA agency’s website.

The report titled “Israeli Practices Toward the Palestinian People and the Question of Apartheid,” which was published earlier this week by the United Nations Economic and Social Commission for Western Asia, drew swift criticism from U.N. and Israeli officials. Its author had concluded that “Israel has established an apartheid regime that systematically institutionalizes racial oppression and domination of the Palestinian people as a whole.”

As revealed by UN Watch, the author of the report was disgraced ex-UN official Richard Falk, who had been denounced on repeated occasions by former UN chief Ban Ki-moon and other world leaders for espousing 9/11 conspiracy theories, blaming the U.S. and Israel for the Boston Marathon bombing, and spreading antisemitism.

Rima Khalaf, a Jordanian who heads the Beirut-based ESCWA, announced her resignation at a press conference in the Lebanese capital Friday.

She described the report as “the first of its kind,” adding that it “concludes scientifically and according to international law that Israel has established an apartheid regime.”

On Wednesday, following the report’s release, U.N. spokesman Stephane Dujarric said it was published without any prior consultations with the U.N. Secretariat and its views do not reflect those of the secretary-general.

“We asked for the report to be taken down from the website,” Dujarric said. “No one at headquarters was consulted. None of the relevant departments were consulted.”

Dujarric added that, “The secretary-general has been very clear in his advocacy for the rights of the Palestinian people. From the start of his mandate he has been advocating for a two-state solution and against any unilateral moves that would undermine that goal”.

Asked whether Guterres succumbed to pressure from the Trump administration, Dujarric said: “This is not about pressure. This is about the secretary-general having the authority to manage the organization in a way that is done effectively and can deliver on its goals.”

U.S. Ambassador Nikki Haley said in a statement: “When someone issues a false and defamatory report in the name of the U.N., it is appropriate that the person resign. U.N. agencies must do a better job of eliminating false and biased work, and I applaud the secretary-general’s decision to distance his good office from it.”

Khalaf has long been criticized by Israeli officials for her perceived anti-Israel positions.

In 2015, Israel’s then ambassador to the U.N., Ron Prosor, urged the organization’s internal watchdog to investigate her, accusing her of “modern day anti-Semitism.” The year before he tried unsuccessfully to get then Secretary-General Ban Ki-moon to suspend her, who responded by saying that he had “full confidence in her, and her work.”

Israel’s UN Ambassador Danny Danon said the report was an “attempt to smear and falsely label the only true democracy in the Middle East by creating a false analogy is despicable and constitutes a blatant lie.”

“Over the years Khalaf has worked to harm Israel and advocate for the BDS (Boycott, Divestment and Sanctions) movement,” he said in a statement issued by Israel’s Foreign Ministry.

“Her removal from the U.N. is long overdue.”