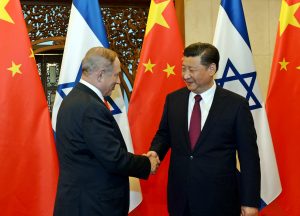 “It’s a pleasure to be here in Beijing again and to see you again, sir. I want to thank you for the extraordinary hospitality you and your government have shown me and my delegation, which includes four ministers.

We have signed many agreements, but I think that your decision to announce a comprehensive innovation partnership between China and Israel is a tremendously important decision, certainly for us in Israel, and I believe through our cooperation, for China as well.

We admire China’s capabilities, its position on the world stage and in history. We have always believed, as we discussed on my previous visit, that Israel can be a partner, a junior partner, but a perfect partner for China in the development of a variety of technologies that change the way we live, how long we live, how healthy we live, the water we drink, the food we eat, the milk that we drink – in every area.

There are vast and rapid changes in technology, which Israel excels in that we believe that we could cooperate in.

We know that you have great scientists, great industrialists, great capabilities, and we think that by working together we can make the future better for our peoples, but also I think for humanity as a whole.

So in this regard, I want to thank you, not only for the friendship you have shown Israel, but for the important strides we are making to make the world a better place for all of us.”

Prior to his meeting with the Chinese President, Prime Minister Netanyahu and his wife Sara laid a wreath at the Monument to the People’s Heroes in Tiananmen Square.

The Prime Minister then proceeded to the Great Hall of the People where he met with National People’s Congress Standing Committee Chairman Zhang Dejiang and told him, “We have made great strides in the 25 years that we’ve had this friendship. We have come a long way on cooperation about economic possibilities, about the betterment of life. And these are all real things that are happening, and I think it’s a great message to our people, but also to the people of the world.”

Zhang Deijang said that while Israel’s population is only eight million it is a leading global force in technology.