UN Human Rights Council: Kill Jews, But Say Free Palestine!
Special to Israel News Agency from Israel Ministry of Foreign Affairs
Instead of investigating Hamas’ deliberate attacks on Israeli civilians and the use of Palestinian civilians as human shields, the UN decided to “investigate” Israel, a democracy exercising its legitimate right of self-defense.
Throughout the recent conflict Israel has done its utmost to comply with the strictest standards of international humanitarian law, despite significant operational costs.

On July 23, while Hamas rocket fire on Israel continued daily,  the United Nations Human Rights Council decided to appoint a “commission of inquiry” the purpose of which is to investigate purported violations of international humanitarian laws in the Palestinian territories, and particularly Gaza, since 13 June 2014.

The blatantly unbalanced mandate of the commission proved yet again the UNHRC’s betrayal of its fundamental mission of defending human rights.

Instead of investigating Hamas’ deliberate attacks on Israeli civilians and the use of Palestinian civilians as human shields, the UN decided to “investigate” Israel, a democracy exercising its legitimate right of self-defense against Hamas’ murderous campaign of terrorism.

In a separate resolution on 1 September, the same Council decided to launch an investigation into the terror acts committed by ISIL in Iraq. While entirely justified, this measure exposed the double standard practiced by the UNHRC. Unlike Hamas, which was not even mentioned in the 23 July decision, this time the terror organization (ISIL) was appropriately singled out.

The acts committed by extremist Islamic terror groups should be unequivocally condemned by the international community – be it in Iraq or in Gaza. Unfortunately the Council is so politicized that it is unable to function as a useful, universal instrument to successfully protect the rights of all victims of terrorism across the globe, Israelis included

Prof. William Schabas has called for the indictment of Prime Minister Netanyahu and former President Peres and has refused to label Hamas a terrorist organization despite its designation as such by the United States, the European Union, the United Kingdom, Canada and other countries.

In addition, Schabas statements from recent days make it very clear that he has already made up his mind that the International Criminal Court should prosecute Israeli individuals, and this even before his commission started working. Prof. Schabas told the BBC on on July 17, 2014, “There are huge numbers of civilian casualties on one side and virtually no civilian causalities on the other, and so prima facie, there is evidence of disproportionality in the response that Israel is undertaking in order to protect itself.” 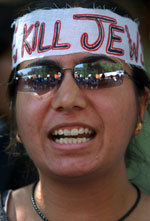 Is she the next President of  UN Human Rights Council?

In October 2012, Schabas told the Russell Tribunal on Palestine that he was “inclined to speak about crimes against humanity, war crimes and crimes of aggression, all of which I think can be shown to have been perpetrated at various times during the history of the State of Israel.”

The work of the commission is tainted also by the fact that Palestinian officials – prominent Palestinian speakers as Ibrahim Kreisha, the PA representative in Geneva, and Hanan Ashrawi – as well as four Palestinian NGO’s, are allowed to be deeply involved in its work.

Throughout the recent conflict Israel has done its utmost to comply with the strictest standards of international humanitarian law, despite significant operational costs.

Moreover, as part of Israel’s commitment to the rule of law, Israel decided to in initiate a professional and comprehensive examination of alleged violations of international law, including the laws of armed conflict.

In the midst of Operation Protective Edge, the IDF Chief of General Staff ordered the establishment of a General Staff Mechanism for Fact-Finding Assessments (the FFA Mechanism) designed to examine exceptional incidents that occurred during the operation. Such incidents include events allegedly resulting in unanticipated harm to civilians as well as events where military activity may have resulted in damage to medical or UN facilities.

The FFA Mechanism is tasked with providing the Israel Military Advocate General (MAG) with initial investigatory information which, in turn, is charged with deciding whether to initiate a full criminal investigation. The MAG enjoys professional independence within the military system. On legal matters he is subject only to the rulings of the Israeli judicial system and to the Attorney General, subject also to review by the Supreme Court of Israel.