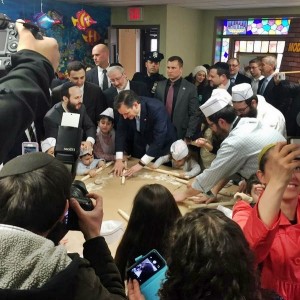 The event took place at the Chabad Neshama Model Matzah Bakery this afternoon. After the matzah making party, Cruz then visited the Jewish Center of Brighton Beach where he wished dozens of New York rabbis and their families a happy and festive Passover.

The Texas senator, who is in the process of closing PLO offices in Washington, was impressed with the final product, admitting, “fresh baked is better than the box,” as he took a bite.

At the Model Matzah Bakery, Cruz joined Rabbi Moishe and his wife, Leah Winner, and led dozens of smiling children in making the matzo and singing “roll, roll, roll the matzo dough.”

As the children sang “Dayenu,” a Passover song, Cruz clapped and sang along, repeating the word “Dayenu.”

Cruz, who is Christian and attends Houston’s First Baptist Church, told Rabbi Moishe he once had the privilege of joining a Holocaust survivor at the Seder table for Passover.

“He actually survived the Holocaust by being in a Gulag in Russia and he spent nine years in the Gulag,” Cruz shared.

In the US Senate today, Senator Cruz stood proud with the Jewish people as he introduced the bipartisan Holocaust Expropriated Art Recovery Act.

The new law which facilitates the return of artwork stolen by Nazis during the Holocaust to their rightful owners or heirs. The HEAR Act would ensure that claims in the United States to Nazi-confiscated art are resolved in a fair and just manner on the merits, and are not barred by state statutes of limitations and other procedural defenses.