New York … On a sun drenched, cool Autumn morning, within a period of two hours, the United States had lost its innocence, isolation and security.

As a journalist reporting from New York, I visited “Ground Zero” twice. A hellish, gray gas, smoke filled area where only twisted metal and body parts remained. A place where I had once worked – a city within a city from where New York’s Twin Towers once proudly kissed the sky.

I had started the day with a run through Central Park. Towards the end of that run I heard a huge roar above me as I looked up to see a large, civilian aircraft flying very low, very fast heading south. I didn’t think much of it as New York is embraced by three airports and thousands of aircraft dotting the skies. Little did I know that was hijacked American Airlines Flight 11 in her final moments.

I made my way back to a restaurant inside the Wellington Hotel. Inside I saw about a dozen people standing around a portable TV set on one of the counters. We saw smoke coming out of the World Trade Center. We were told that a small plane, Piper or Cessna had hit one of the towers. Then we saw a second aircraft slam the north tower of World Trade Center. What at first appeared to be an accident quickly turned into a transparent attack on the US. I made my way down to the United Nations where my family had a nearby apartment. From the roof of that building I witnessed the World Trade Center burning. One could smell the acrid smoke. One could see thousands of people slowly walking up First Avenue covered in a whiteish, grayish soot heading to exit a closed Manhattan through the 59th Street Bridge. It was like watching a horror movie.

The following morning I headed down to NYPD’s headquarters to secure press credentials. After 3 hours of waiting on line, it was a short walk to Ground Zero.

Slowly approaching the area, you could hear the roar of F-15’s flying overhead, circling Manhattan.

The smell of burnt plastic and rubber filled the air – burning the eyes and throat. You walk past American landmark symbols, such as the NASDAQ building with it’s sign cracked and submerged in debris, covered with a fine, thin, grey dust.

Israelis live in an atmosphere where senseless and barbaric terrorist attacks have almost become routine. Israelis have adjusted to a traumatized life style where crazy has become the norm. But for America – for Americans it has been very, very different. Americans had become so isolated from global affairs that on September 11th with total surprise they repeatedly kept asking “why”, “why did this happen to us?”

American culture had become so safe, so secure – approaching uncomfortable heights of boredom which manifested itself into “reality television”.

On September 11th – every American had now taken a lead role in the popular TV series “Survivor” and “Lost “. But only for a very short period of time. For Americans are an intelligent and proud people who once threatened, join hands, hold their Stars and Stripes above their heads and transform a “sleeping giant” into a fierce and fiery eagle which is unmatched for it’s potent, respected speed and power.

Standing among the ruins of the World Trade Center’s Twin Towers, wearing a white hard-hat and breathing through a gray and red gas mask – one could only remember the Gulf War. A time when all Israelis wore gas masks, heard sirens wail and scud missiles explode.

In the middle of where the Twin Towers once stood were three gray, dust laden flag poles. One which would bear the flag of New York, another the flag of the World Trade Center and the third – the flag of the United States of America. Only one flag survived this terrorist attack, the American flag and three fire fighters made sure it was going to stand for a long time to come. American flags quickly blossomed in every direction – hanging from tall commercial buildings, taped to store windows and flying from car antennas. Nationalism had revisited the United States for the first time since the December 7th attack on Pearl Harbor.

Police, fire and National guard soldiers created a five mile security perimeter. Soldiers marching in green uniforms with automatic weapons at the ready and armored personnel carriers patrolling the streets. It was a nightmarish scene, something that only existed previously in Hollywood sci-fi movies. But now – it was not King Kong or Godzilla, but rather human beasts which had turned the lights out on what was once America’s vibrant financial capital.

In effect, this security perimeter created two cities – one which was completely evacuated leaving behind devastation and thick smoke south of Canal Street and the other up North – clean with restaurant and hotel doors open but almost completely deserted.

Traumatized New Yorkers took refuge in their cement caves as others headed for their green,  tranquil suburban homes.

The only activity was in the city to the south where brave rescue workers from New York and those who had driven hundreds of miles to assist from other states and cities, were digging under intense search lights, non-stop for any signal of life.

Many of these huge, brave men, sweat dripping from their faces, were seen collapsing and crying from total exhaustion – not wanting to leave, not wanting to rest – their only desire was to find survivors who might still be alive trapped in air pockets below. Vietnam veterans had dusted off their old uniforms volunteering to join the search with sniffer dogs attached to their wrists. 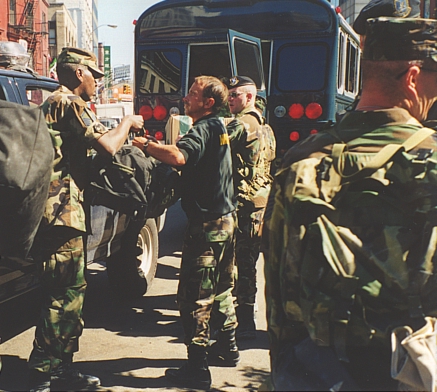 Tons of supplies were donated and placed at the site. Food, medical and construction materials were within a few feet of the workers. At this point only 159 bodies had been recovered. 20,000 tons of debris had been carefully removed – ever so carefully so as not to create further danger for the survivors and rescuers and so that criminal evidence could be gathered and analyzed.

For a period of time, I was detained and interrogated by the FBI. They ignored my New York Police Department press credentials and were obsessed with my Israeli nationality.

“What did you know about the attack” they asked. I was in shock. I looked at them with revulsion as if to say: “how can you dare associate me with this barbaric act?”

These agents did not know that I was born and bred in the USA, that I had worked at the World Trade Center for several years, that my brother had an office across the street on Vesey and that I was no less American than they are.

After three hours they released me, taking both my film and press credentials. They were overreacting, but I could not blame them, it was the first time that many of them were face to face with terrorism. Some Israeli officials suggested that I file formal complaints, I responded, “this is not the time, these are our friends and they are traumatized, let it go”.

As an American citizen who had done absolutely nothing wrong and in fact had valid NYPD press credentials and followed all of the rules – it was a very sad and traumatic experience, but if the film and photos that I took in Manhattan of candle lit memorials, paper signs showing photos of the missing tacked onto light poles and the pure devastation at Ground Zero assists the FBI in their investigations and research – I’m pleased!

The policeman, the fireman, the uniformed soldiers in their new, shining black boots – all had tears in their eyes.
A piece of America had been ripped away from them. We were on holy ground, no one spoke at Ground Zero unless they had to. You worked, you ate, you rested and worked again in a deafening and depressing silence.

You smelled death and heard only the sound of jackhammers.

As one left “Ground Zero” you could not miss the hundreds of memorial candles lighting up the entrance to the New York fire department’s World Trade Center Ladder Company Number 10 which had lost so many good and brave men. Thousands of posters were clinging onto telephone and electric poles with photos staring at you, descriptions of many of the men, woman and children who were missing.

Darkened churches, parks and subway stations were also lit up displaying more posters and more flowers throughout the city. 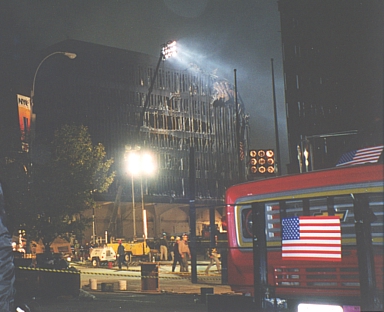 You could not escape the shock, tears, or anger. America and the world had never witnessed such an evil and barbaric act of terror in the history of mankind. You could only think – what kind of people, what kind of animals could murder so many, could even kill their own Muslim brothers who were working in the Trade Center? 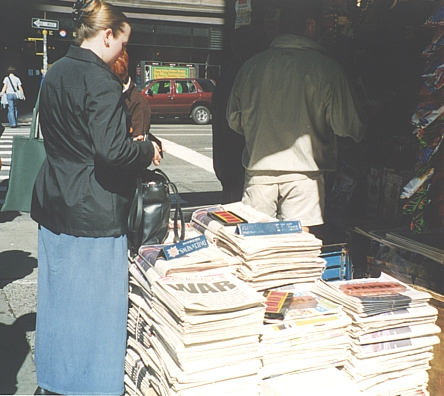 As I was now riding north on a subway train to the other city, two exhausted, spent fire fighters sat across from me. I asked them what they thought, how would they describe all that they had seen.

They looked up at me and responded with only one word – “war”.