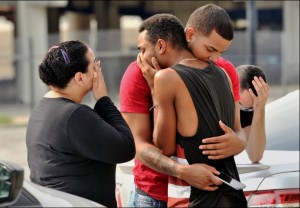 “On behalf of the people and government of Israel, I extend our deepest condolences to the American people following last night’s horrific attack on the LGBT community in Orlando.

Israel stands shoulder to shoulder with the United States at this moment of tragic loss.

We send our heartfelt sympathies to the families of the victims and wish a full and speedy recovery to the wounded.”

An American born, Islamic terrorist murdered at least 50 people and injured 53 others in a gay nightclub in Florida early Sunday morning before police shot him dead.  US authorities have described the terror attack as the worst mass shooting in US history.