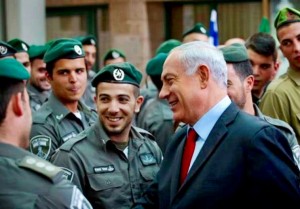 Jerusalem, Israel — March 12, 2015 … Part of the following was communicated by the Prime Minister’s Office to the Israel News Agency.

“I came here today to note the activity of the security forces on duty in Jerusalem, and to commend the fighters who, in recent weeks, have – time and again – foiled attempts to perpetrate terrorist attacks in our capital city.

In the end, the test is upon the person himself, the same police officers and the security guard who, at the decisive moment, simply did the work.

The eyes of the entire world are on Jerusalem, our capital city. There are those who are trying to undermine it. There are those who are trying to ignite a religious war here. The sensitivity, wisdom and responsibility of the commanders, soldiers, security personnel and citizens is critical in order to maintain security in the city and prevent the same conflagration that extremist Islam is igniting throughout the Middle East.”

Netanyahu concluded: “This mission is very complex and I would like to thank those who are involved in the matter – the Police Commissioner, the Mayor of Jerusalem, the Israel Border Police commander, the police personnel, the volunteers and all of the fighters.”