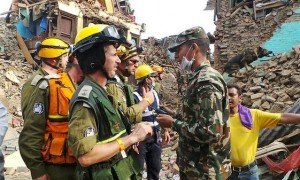 Without even knowing it, the Israeli and Nepalese
are enjoying the same perception of personal space.

Jerusalem, Israel — May 2, 2015 … The last thing that many Israeli volunteers thought of as they rushed off to save lives in Nepal was the do’s and don’ts of communicating effectively in Nepal.

Members of the IDF, IsraAid and MDA had only 24 hours to buy work clothes suitable for Nepal, get vaccinations and make sure that their cell phones would work from this earthquake, shattered nation.

Israel and Nepal share many of the same cultural values, yet many of our perceptions are so very different. One mistake could cost a life.

When greeting people in Nepal – do not use the handshake. Rather, bring both of your hands together at chest level below the chin and say “Namaste”. Translated roughly, it means “I bow to the God within you” or “The Spirit within me salutes the Spirit in you”. 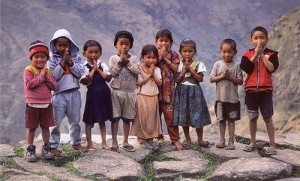 Only if the Nepal counterpart reached out first with a handshake – then go for the handshake.

In the area of personal space, the Israeli and Nepalese are on the same page. Both stand close to one another in contrast to the American who needs much more personal space.

Another area where the Nepalese and Israelis are on the same page is the importance of family. This is a great subject to break the ice with – and in earthquake shaken Nepal you just might not have any choice. Go slowly in asking questions and give time for the Nepalese to warm up to you. And here we now have another difference. Israelis rush while Nepalese tend to take life at a slower stride. But when it comes to meeting someone, both the Nepalese and Israelis again have something in common – both keep Jewish time. A 3:00 meeting may actually begin 30 minutes or an hour later. 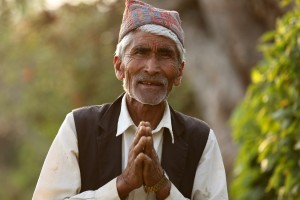 Perhaps the greatest difference in cultural communication is how we say yes and no.
Yes means no and no means yes. Sounds confusing? It is. The Nepalese will say yes by shaking their head from side to side and will say no by nodding their head up and down. Get verbal confirmation with hearing a yes or no when speaking with Nepalese. Even better – make sure you have a translator present if the situation is critical.

Too much eye contact would be considered aggressive behaviour, especially when dealing with older people or employers.

Unlike in Israel where we can yell at each other one moment and the next be hugging, raising your voice at others would not be appropriate.  Also in contrast to Israel, most Nepalese do not like direct confrontation and therefore, public expression of anger is not socially acceptable. Men are expected to be stoic in the face of tragedy whereas women can express their feelings.

Non-verbal communication that can offend would be pointing your feet at people when sitting on the ground, walking in between people as they talk, and offering anything to anyone or eating with your left hand (which is considered unclean).

Personal relationships are very important in Nepal, and therefore much time is spent on establishing these over endless cups of ’chai’ (tea). Same as in Israel with our nescafe. Questions about family, work, life experiences are good ways to establish these relationships.

Confronting a colleague directly in public regarding work problems would be seen as a personal attack. It would be more appropriate to deal with this privately and in an informal way.

Enjoy the tea and remember that no matter how exhausted you might be – always smile.
That is our most potent means of communication.