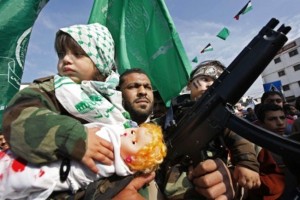 Palestinian terrorists hide behind children
as they attack Israeli civilians.

The report from the Geneva-based UN Human Rights Council blasted Israel, which publicized a preemptive report last week from military and political leaders around the world that determined Israel went to great lengths above and beyond international requirements to minimize civilian casualties.

“Israel is a democracy committed to the rule of law. Time and again it is forced to defend itself against Palestinian terrorists who commit a double war crime: They deliberately target civilians while deliberately hiding behind Palestinian civilians.”

“The Palestinians civilians they use as human shields include children, and they deliberately target our civilians while deliberately putting their civilians in harm’s way,” said Netanyahu.

“In defending itself against such attacks, Israel’s military acted, and acts, according to the highest international standards.

The report in hand was commissioned by a notoriously biased institution; it was given an obviously biased mandate; it was initially headed by a grossly biased chairperson who received money from the Palestinians and was forced to resign.

The United Nations Human Rights Council has a singular obsession with Israel.

Netanyahu added: “So, Israel treats this report as flawed and biased, and it urges all fair-minded observers to do the same.

Such fair-minded observers recently investigated Israel’s conduct in the Gaza campaign. They include senior generals from the United States and NATO countries. They found that not only did Israel uphold the highest standards of international law, in the laws of armed conflict, they said that Israel exceeded the highest standards.

Israel will continue to uphold its commitment to the laws of armed conflict despite the brutal tactics of its enemies and it will continue to investigate any allegations of wrongdoing in accordance with highest international standards.”