Play this song as you read the below feature.

Beresheet reached it’s target. Disappointing that the main engine and communications cut out on descent, and we will fix these and other bugs with Beresheet 2.0.

Have no doubt about Israel’s space industry. Israel has produced some of the world’s finest, most sophisticated satellites – for both weather and defense purposes.
All created by the government with an adequate budget. 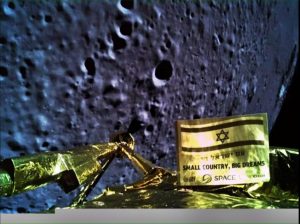 Beresheet’s last photo, taken moments before the crash –
a selfie of herself – was a message for us all – keep dreaming, keep doing.

The greatest success illustrated by Beresheet is the respected Israeli asset of making a dream come true. Having vision and not letting go of it.

On a shoestring budget, we produced a spacecraft that reached the moon. Granted, not in one piece, but perhaps hundreds of which one day we can look back and hold one of those pieces, smile and say with pride – this is where our space journey started.

I was in uniform at the IDF Spokesperson’s office when Israel’s first astronaut Ilan Ramon perished. It was truly a tragic day. Nothing can equate the loss of life. But this was different. Beresheet was a scientific experiment, a romantic dream that went mostly to plan, an experiment for which we will learn from and grow as we create Beresheet 2.0.

There was no loss of life. There was real achievement, sweat, limited success, much education and inspiration designed for every Jewish child to look up and say: “Yes I can, never give up.”

In the IDF we have one word to describe today’s Beresheet mission. That word is Kadeema.
To move forward with all that we have learned and prepare ourselves for the next mission.
As Israelis, we do not fail. We may hit bumps, but we get right back up and move forward – with a Beresheet smile. And we say Kadeema! – Joel Leyden, Publisher, IsraelMoon.com.