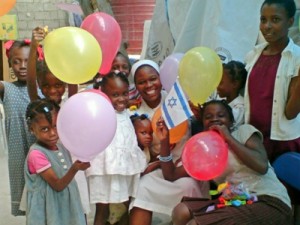 Jerusalem — September 22, 2014 … Doctors and nurses from Israel will be risking their lives as they join an international effort to combat the Ebola epidemic sweeping across  Africa.

Doctors and other health care professionals from Tel Aviv, Jerusalem, Haifa and Beer Sheva who specialize in infectious disease are being sent to Sierra Leone, Cameroon and Liberia to treat infected patients and help prevent spread of the deadly virus.

Two physicians are already in Cameroon on behalf of the Israel Foreign Ministry in Jerusalem and others will be joining them in the near future, while a shipment of medicine and medical equipment is planned to depart from Ben-Gurion International Airport this week.

The United States, along with a host of other nations, and international organizations have scrambled to combat the worst Ebola outbreak in history, which has killed some 2,600 people and infected around 5,300 others in West Africa since the early spring, according to the World Health Organization.

At a special deliberation Friday on the situation at the UN in New York, Israeli envoy Ron Prosor said that in the same way Israel extended aid to Haiti, Ghana and the Philippines following devastating earthquakes and tsunamis, it is now prepared to tackle “the new challenge” confronting the world.

“The international community holds the tools and the knowledge to save thousands of human beings, but at present the world’s response isn’t enough, people are pleading for help” Prosor said. He added that a world crisis requires an international response because “every country has a role in the fight against Ebola. The entire world has to replace the indifference with initiative and finding solutions.”

Israel – the first to respond with global, humanitarian aid.

Meanwhile, IsraAID, a Beersheba-based humanitarian aid agency that responds to emergency crises worldwide, will send two teams of its own experts to the Ebola-stricken Sierra Leone and Liberia later this week, according to the report.

One Israeli team will assist in operating a program for treating trauma that aims to help the general population deal with fear of the disease and the stress created in its wake. The other will instruct households in the use of hygiene kits to prevent further spread of the virus.

One thought on “Israel Sending Doctors, Nurses To Africa To Save Lives Of Ebola Victims”