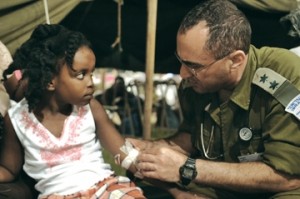 Israel – repeating the miracle of Haiti in Nepal.

The Prime Minister was informed that the rescue mission to Nepal includes an IDF field hospital and that its goals were locating Israelis, rescuing people who were trapped and treating the injured. IDF Col. Laredo told Prime Minister Netanyahu that an advance team had already landed and was preparing the infrastructure for the arrival of the humanitarian mission.

“You are being sent on an important mission. This is the true face of Israel – a country that offers aid over any distance at such moments. Good luck. We are counting on you,” said Netanyahu.

A 260-person Israel Defense Forces mission carrying 95 tons of supplies and 40 doctors has departed for Nepal on this Sunday night. The IDF will remain there for at least two weeks.

When it arrives on Monday, half the Israeli team will set up a field hospital — including operating rooms, X-ray equipment and pediatric care — to provide emergency medical services to the wounded. The other half will conduct search-and-rescue missions in collapsed buildings.

IDF Spokesman Lt. Col. Peter Lerner expects Israel’s field hospital to be the first in operation in Nepal. In the past, the IDF has set up field hospitals following natural disasters in Haiti, the Philippines and Japan.

“It’s one of the missions the IDF sees itself prepared for and willing to do,” said Lerner. “The Home Front Command is ultimately built to carry out evacuation-type scenarios in Israel, so they are planning and preparing and executing for buildings that have collapsed here. If we can take that knowledge and help people across the world who are in desperation, it’s the right thing to do.”

Israel President Reuven Rivlin spoke this evening with senior IDF Home Front Command officer Brig.-Gen. Yoel Strick, as he prepared to send a team of 260 search and rescue, and medical professionals from Israel to the disaster area in Katmandu, Nepal.

“My blessings go to all the team undertaking this brave and humanitarian mission,” said President Rivlin. ” I am proud of you and your staff for their speedy and impressive enlistment at such a time of need.  This delegation of ‘messenger angels’ represents the universal values, in the spirit of our people and our country, and through you, I wish to thank each and every one of them.”

IDF Brig.-Gen. Strick explained that the first plane had already landed at its destination, during the subsequent earthquake which occurred today.  He shared with the President that he had received hundreds of applications from those of all professions and rescue groups, who wanted to be dispatched on this important aid mission.  He said: “We have set out on a mission which symbolizes all that the IDF stands for, and we are greatly proud of this.”

The Brig.-Gen. thanked the President for his kind words, and said he would pass them on to the members of the delegation.

A day after an earthquake killed more than 2,400 people and injured about 6,000, residents grew frantic and the government was entirely overwhelmed as aftershocks sent the people of Katmandu screaming into the streets.