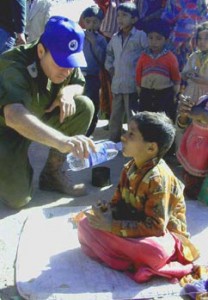 ………….. PM Netanyahu Holds Update on the Situation in Nepal

It was agreed to dispatch – as soon as possible – a rescue delegation including medical support. The humanitarian delegation will land near the affected zone and make its preparations until it becomes possible to land in Nepal.

Israelis in the affected zone will receive the means necessary to return to Israel. The Prime Minister, on behalf of the Israeli people, conveys his deepest condolences to the people of Nepal and says that Israel will render such assistance as may be required.

The IDF announced that they will send a delegation to determine the extent of required humanitarian aid assistance. The mission is set to fly out in the next 24 hours on the orders of IDF Chief of Staff, Lt. Gen. Gadi Eisenkot.

Thousands were killed in an earthquake measuring 7.9 magnitude which struck east of Pokhara in Nepal on Saturday. The earthquake caused buildings and centuries-old temples in the capital Kathmandu to collapse and cut open roads in the worst tremor in the Himalayan nation in 81 years.

Several Israelis were lightly injured in the deadly earthquake in Nepal according to the Israel Foreign Ministry. The number of Israelis designated ‘out of reach’ was raised to 250.

As Kathmandu airport in Nepal remains closed following the devastating earthquake, the Israel Foreign Ministry is working to evacuate newborns to Israel.

The 24 infants born in recent days to surrogate mothers in Nepal are waiting with their Israeli parents to be evacuated following the lethal earthquake which struck the area on Saturday morning.

Nine of the infants were born premature and one is in serious condition. The Foreign Ministry told Ynet that it planned to fly out the families in helicopters from Nepal to neighboring India because the airport in Kathmandu was closed.

A global support page for Israel’s Nepal humanitarian efforts has been established at  www.Israel4Nepal.com.